Many pie recipes call for a pre-baked or blind-baked pie crust before the filling is added. This is a simple “How To” that shows how to pre-bake a pie crust without any fancy gadgets – just a piece of foil! 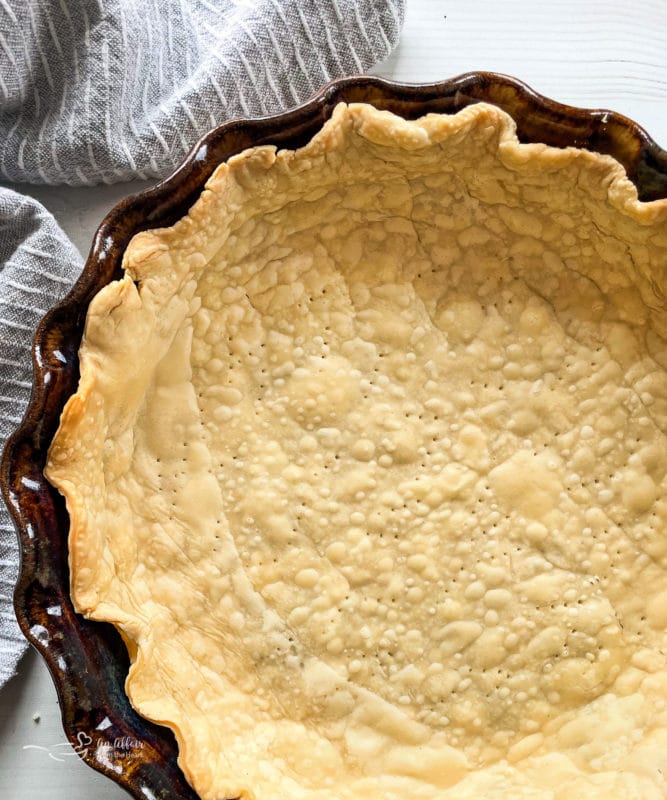 Have you ever made a recipe that called to “pre-bake your crust” and you made the crust, put it in the pan, baked it, and it slide down the side of the pie pan into the bottom?
So, you maybe cussed a little, then sprinkled it with cinnamon and sugar and baked it the rest of the way, ate it to heal your ego, bought a pre-made crust, and used it instead?

Now… in case you need to pre-bake a crust, here’s the super-easy way to do it correctly!

HOW TO BLIND BAKE A PIE CRUST

To blind bake a crust, first you must get a dark scarf and blindfold yourself… Just kidding! Only try that when you can make a pie crust with your eyes closed. When you blind bake a crust, you want to just lightly bake the crust first and there are some tricks to help make it cook evenly and perfectly.

WHAT DOES BLIND BAKING MEAN?

The term “blind baking” a pie crust comes from old English baking recipes and it refers to pre-baking the crust lightly first empty of other ingredients. Blind baking the crust simply means the crust is free of any ingredients – so it is “blind” to whatever might be used as a filling. I know that sounds weird, but remember, England is the same country where a car trunk is called the “boot”.

HOW TO PRE-BAKE A PIE CRUST

The trick to blind baking a pie crust is making sure it cooks very lightly and very evenly. The goal is to not cook it too much, but just enough. After all, you will be cooking it more when you add the ingredients to it most likely. Of course, you also don’t necessarily need to cook it and can use other ingredients, like ice cream for example.

HOW TO PAR-BAKE A PIE CRUST

With blind baking, you essentially are par-baking the dough. Just like parboiling, par-baking means lightly cooking something as high heat for a limited amount of time. Again, you are cooking just long enough to cook the pie dough and form a crust, but not so much that it becomes crusty and crumbly.

WHAT TEMP TO BLIND BAKE YOUR CRUST?

The key to blind baking isn’t just what temperature you bake it at, but also what temp you START with for the crust itself. The uncooked pie crust should be chilled in a fridge first before tossing it in the oven. Why chill it first? If you chill it first, then the fat in the crust firms up enough to help hold the crust’s shape and thickness. This will also help prevent the crust from shrinking as you cook it. Preheat the oven to 450 degrees Fahrenheit, then it is ready to go.

HOW LONG TO BLIND BAKE A PIE DOUGH CRUST?

You will want to keep an eye on it, but it should be ready in about 6 minutes. If you are using a small oven, like a toaster oven, or convection oven, then it might cook more quickly. However, once you dial in your first blind-baked crust, then you will be set for any future crusts. 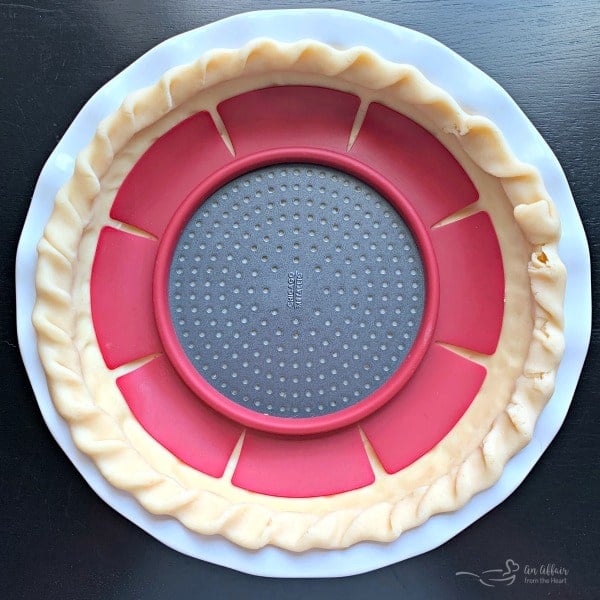 HOW DO YOU BLIND BAKE/PRE-BAKE A CRUST WITHOUT WEIGHTS?

There are actual “pie weights” you can buy to help form the crust, but don’t feel like you have to run to the store for them. But, in a pinch, you can use workarounds like my foil method shown here or other tricks as well. Cutting a piece of parchment paper, then placing it on the crust, and laying dried beans on top or even pennies works too. Except make sure you wash them first. Especially the pennies… you don’t know who has been touching those.

If you are wanting to have pie weights on hand, there are a few to choose from:

So, the simple answer is yes. Going back to what I said in the beginning…

If you don’t want a slumped-out lump of dough that doesn’t look like a pie crust but more like a loaf of bread fail, then blind baking the crust is the only way to go. Pre-baking the crust helps set the shape, keeps the thickness correct and makes adding ingredients, hot or cold, much easier.

HOW TO PRE-BAKE A STORE-BOUGHT CRUST?

So, don’t feel like a cheater if you want to use a pre-made crust either. Those work well and simplify life when needed too. You might find pre-made crusts either frozen or unfrozen at the grocery store and either is fine. The only difference is how you treat them for blind baking them. With a frozen raw crust, it is preferable to let it thaw first, but still, keep it chilled in the fridge.

Then the bake time is the same as for an unfrozen pie crust and you don’t have to worry as much about overcooking the edge. 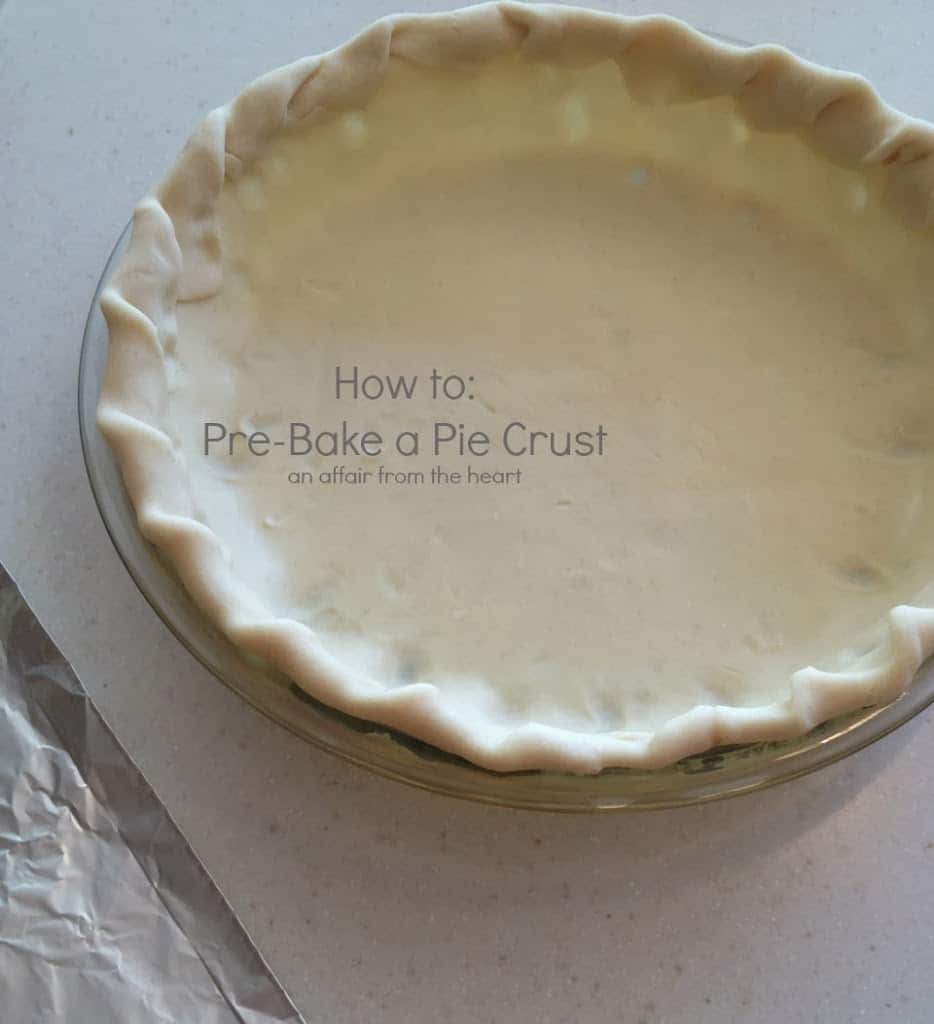 How To Pre-Bake a Pie Crust 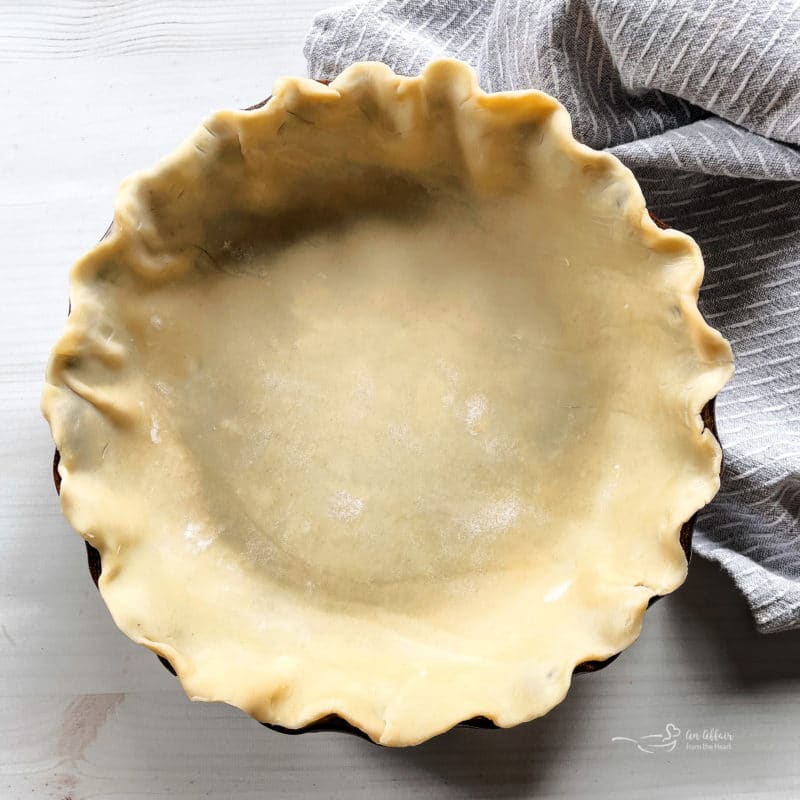 Lay your dough on your pie plate and form the crust edge.

Using the tines of a fork, prick holes in the pie crust. 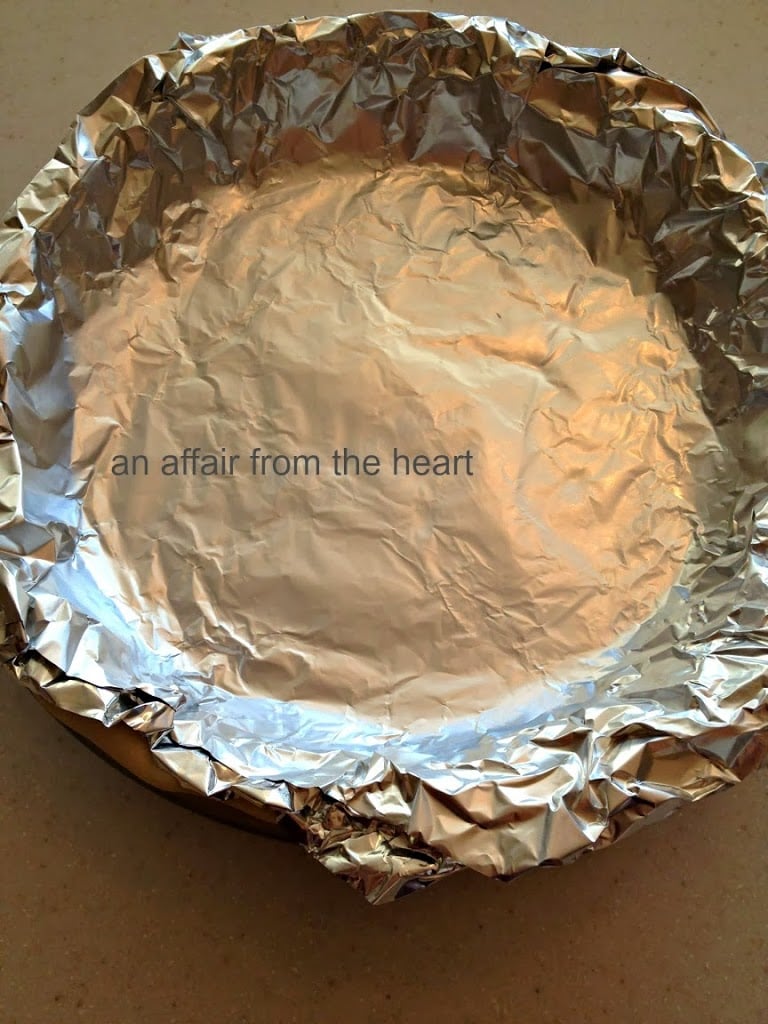 Lay a large piece of heavy-duty foil over crust and form to cover.

Bake for 4 minutes. Remove foil and bake for 2 minutes more.

Remove from the oven and cool.

Fill with whatever your pie-loving heart desires!! 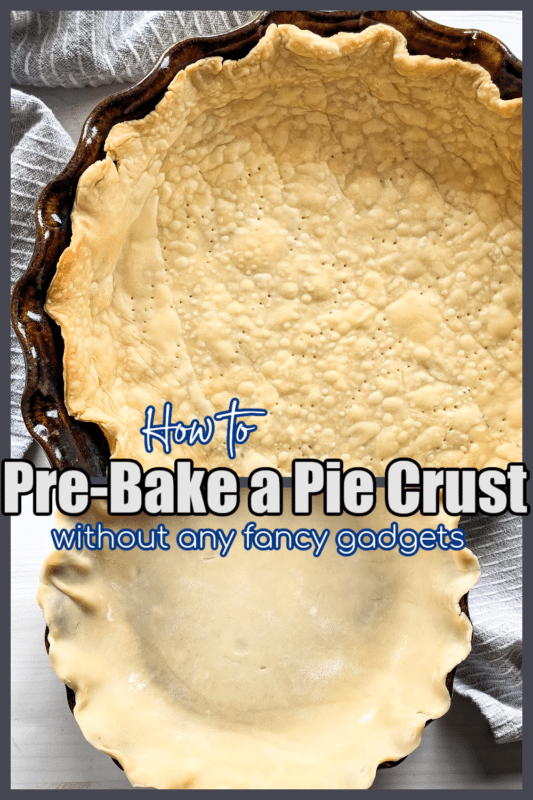 Be sure to bookmark this page, or pin it to your favorite Pinterest board so that you can find these helpful tips on blind baking a pie crust when you need them! 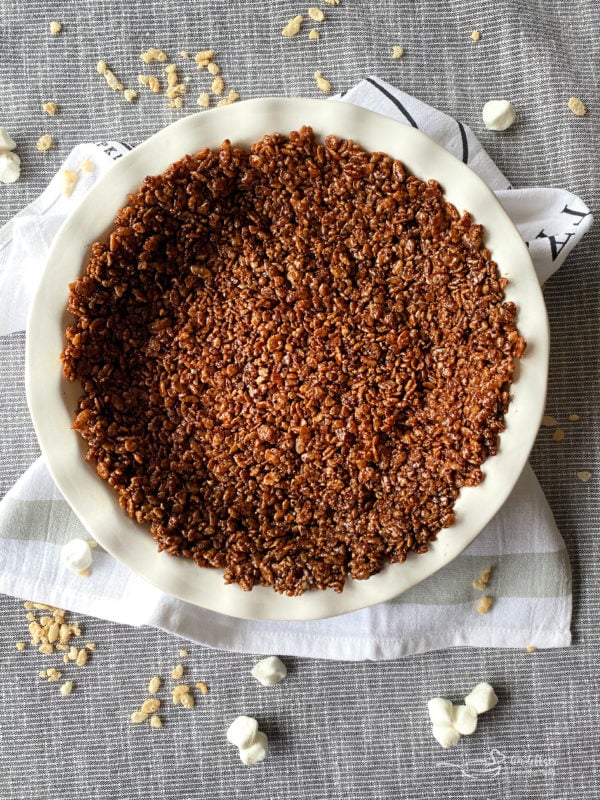 It’s no secret how much I love my pie recipes! Pie is the superior dessert in my book! Here are some other fun ways to make a pie crust:

Fill the Chocolate Marshmallow Pie Crust you see pictured above with ice cream for a simple and yummy dessert. This Bacon & Swiss Quiche Recipe uses my Grandmother’s Homemade Pie Crust, which is what I have used here in this post.

How about slab pies? My Pumpkin Pie Bars use a Shortbread Crust and my Key Lime Slab Pie has a slightly sweet crust. My French Silk Pie can be baked in either a regular crust or an Oreo Cookie pie Crust and this Coconut Banana Cream Pie‘s crust is actually made of toasted coconut! Yum! 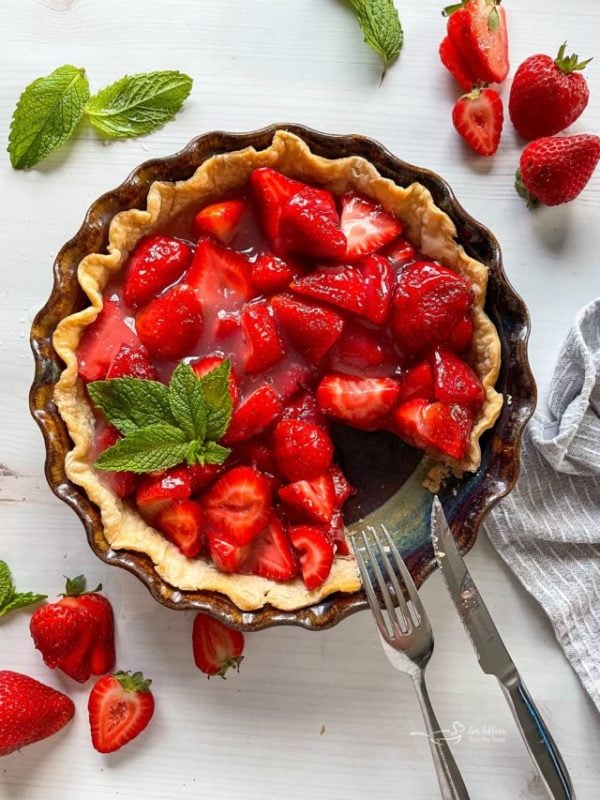 Now that you have the technique down, it’s time to make some pies! If you’d like to make a pie crust from scratch, this is my Grandma’s Homemade Pie Crust Recipe.

Of course, store-purchased crust works, too!

Here are some sweet and savory options, or browse all of my pies at once here. 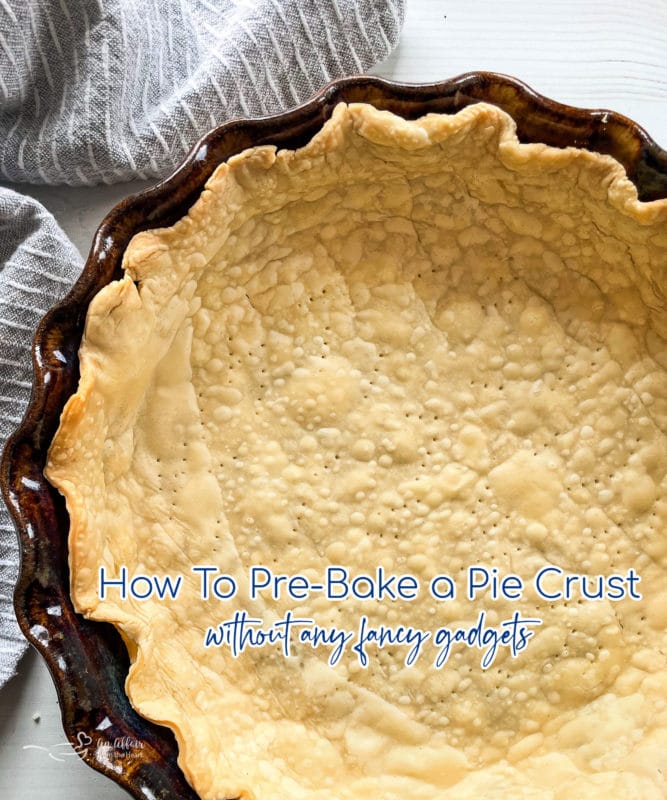 Time to get baking so we can get to the pie eating!

Pies like Pecan will not require you to cool the crust before filling, since it is going back in the oven. But cold fillings will be best if added after your crust is completely cooled.

Please note that nutrition is not guaranteed accurate. Based on one entire pie crust.

This post was originally shared on December 16, 2013. It has been updated to improve user experience and re-shared on March 20, 2022.

Hey! I’m Michaela, welcome to my kitchen!  While you’re here with me, I hope that you will find all sorts of simple and yummy recipes to share with your family. I pride myself on sharing tried ... END_OF_DOCUMENT_TOKEN_TO_BE_REPLACED 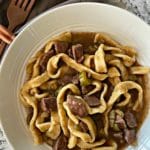 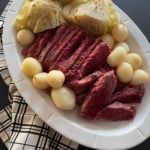 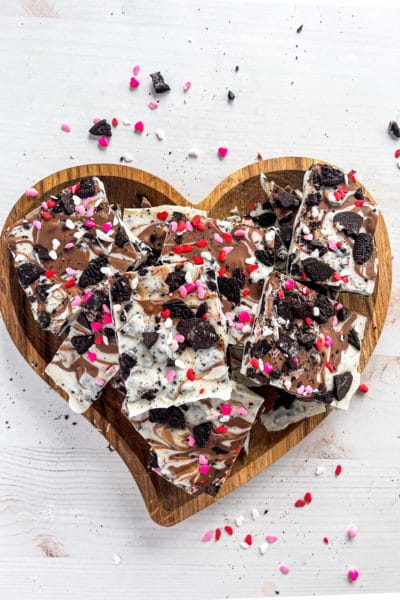 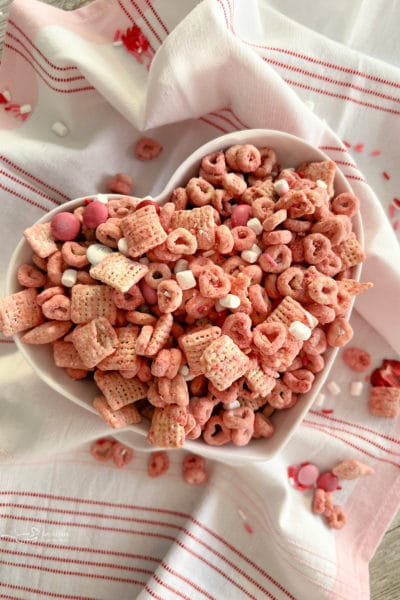 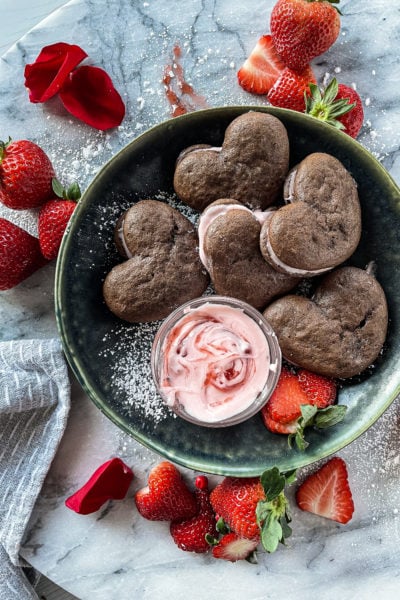 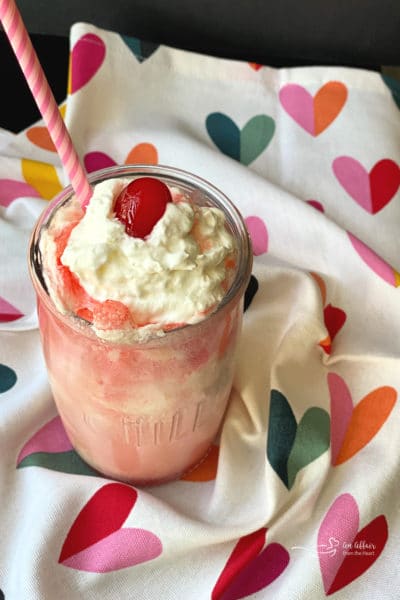 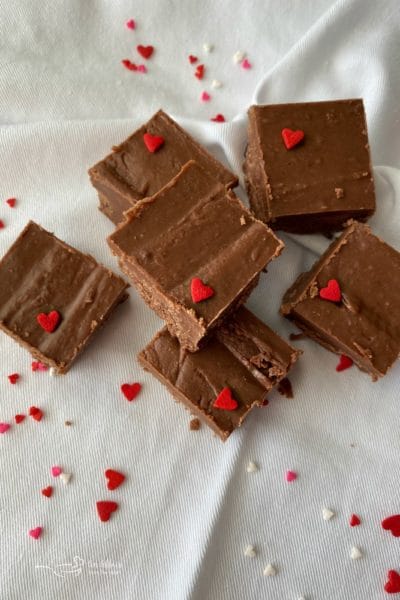