A pile of corned beef, slices of Swiss cheese, Frank’s Kraut and Thousand Island dressing grilled between two slices of your favorite rye bread until the cheese is perfect and melty.  What more could anyone really ask for in a sandwich? It’s the whole package. 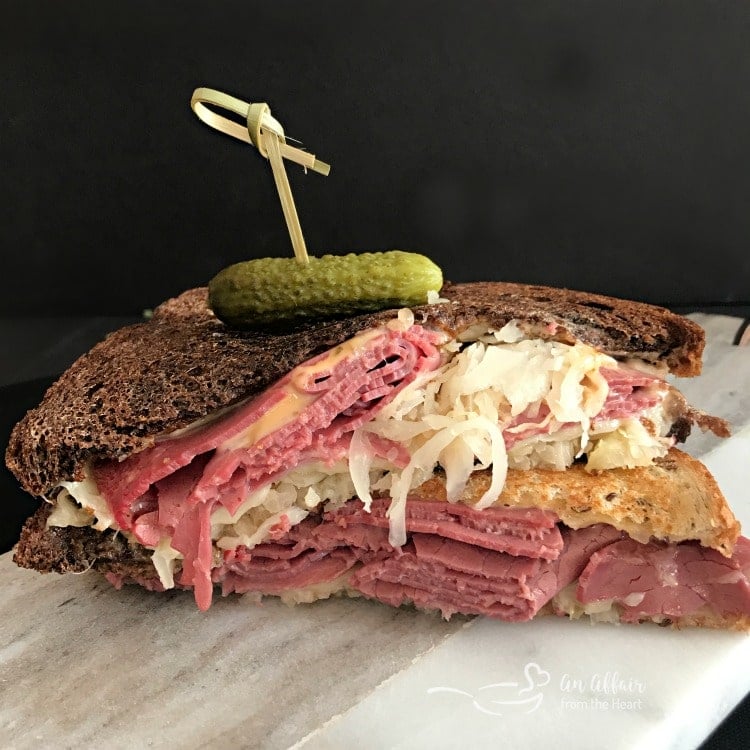 Thank you to Frank’s Kraut for sponsoring this post.  Know that the opinions in this post and the love for their sauerkraut is all my own.  Please support the brands that make An Affair from the Heart possible. 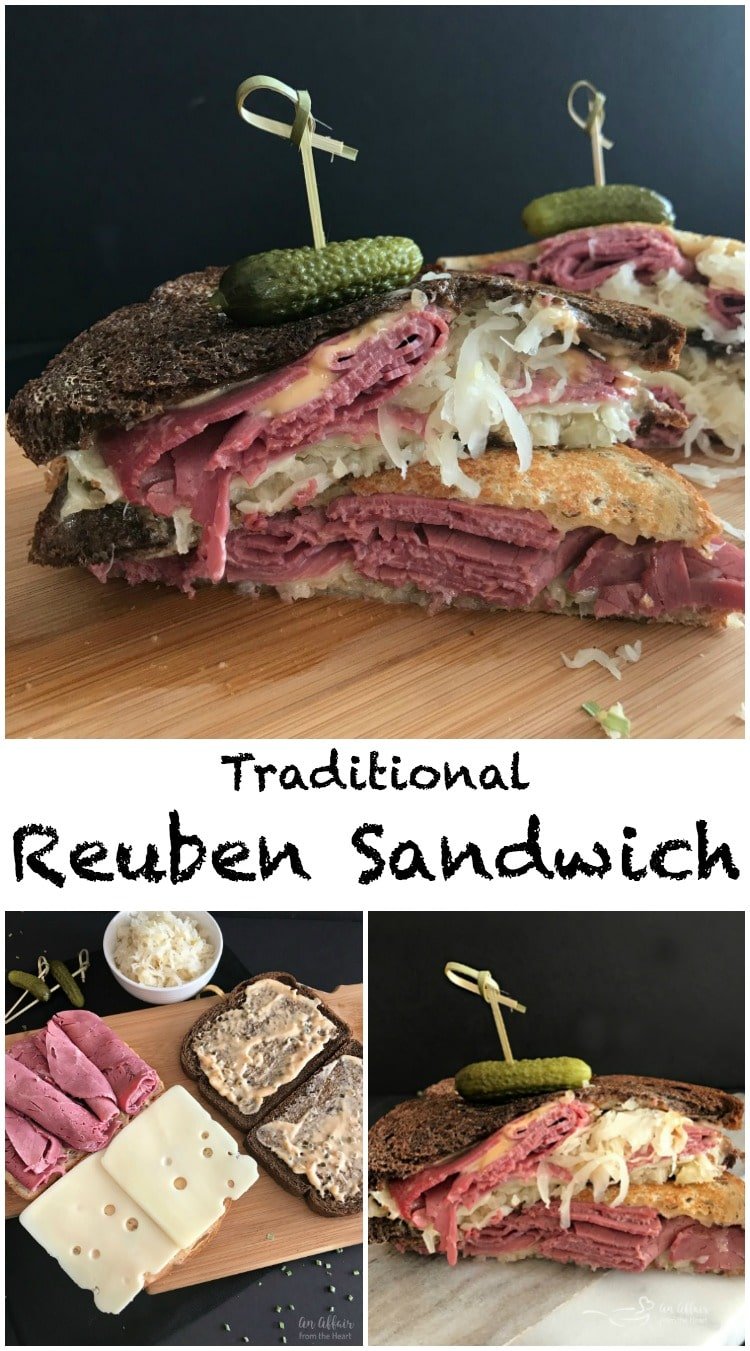 Some folks in other places may argue where the Reuben Sandwich originated.  I am holding true to the fact that it was created right here in my hometown of Omaha, Nebraska, at the well known Blackstone Hotel. A Jewish Lithuanian-born grocer, named Reuben Kulakofsky, was the maker of the first Reuben Sandwich.  Reuben attended a weekly poker game held at the Blackstone Hotel between the years of 1920-1935.  The group came to refer to themselves as “The Committee.”  The sandwich came into fame when one of the other poker players, Charles Schimmel, the hotel’s owner, put the sandwich on the hotel’s lunch menu.  And the rest, as they say is history.

The Blackstone Hotel, now known as the Blackstone Center, is located at 302 South 36th Street in Omaha, Nebraska. The hotel was built in 1915, it was declared an Omaha Landmark in 1983. It’s no longer used as a hotel but as offices in an very up and coming area called the Blackstone District. 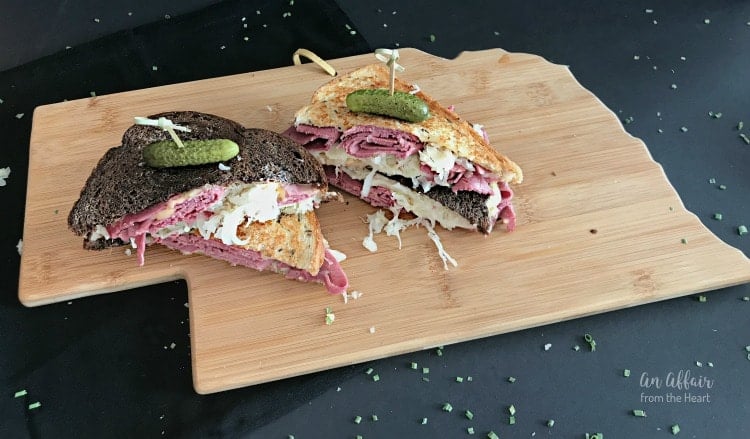 March is National Reuben month, but in Omaha, we have a National Reuben Sandwich Day – March 14, of every year. Many of the local restaurants and pubs have their claim to fame Reuben sandwich, and you can get them year round, but March — March is when the Reuben is really celebrated! 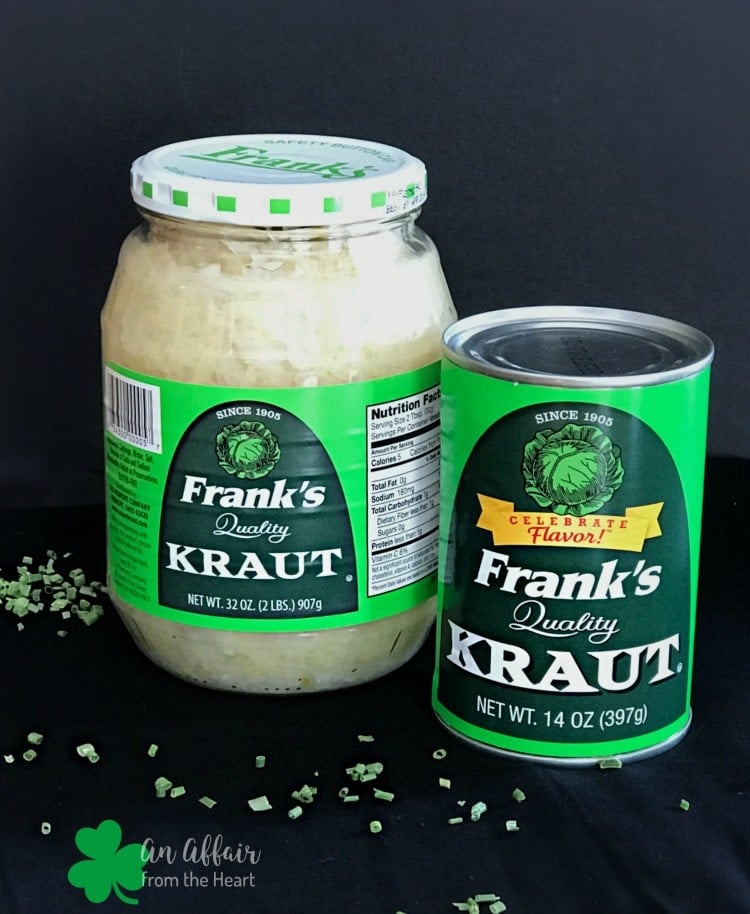 Nothing make a Reuben better than Frank’s Kraut.  My family has only ever purchased Frank’s Kraut, my grandmother, my mother and now me.  I have had a long standing relationship with Frank’s over the last few years, and developing recipes for them has been a real honor for me.  We have shared countless sauerkraut and Reuben Recipes over the years, I hope you take some time to see all of the different ways we have used their wonderful kraut, right here on my website.  Everything from appetizers and salads, from soup to pizza, from main dishes to even dessert! 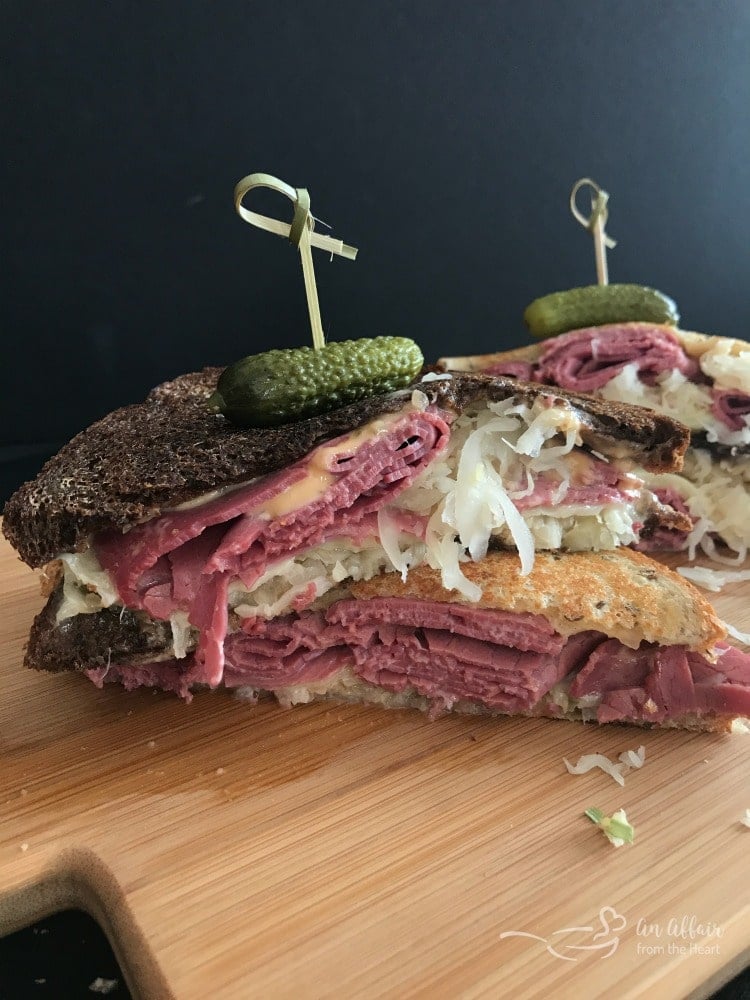 Many times I purchase a marbled rye bread when I make Reubens.  This time I gave my family the option between a seeded light rye or a pumpernickel rye.  Most of them decided on half and half.  Good choice! 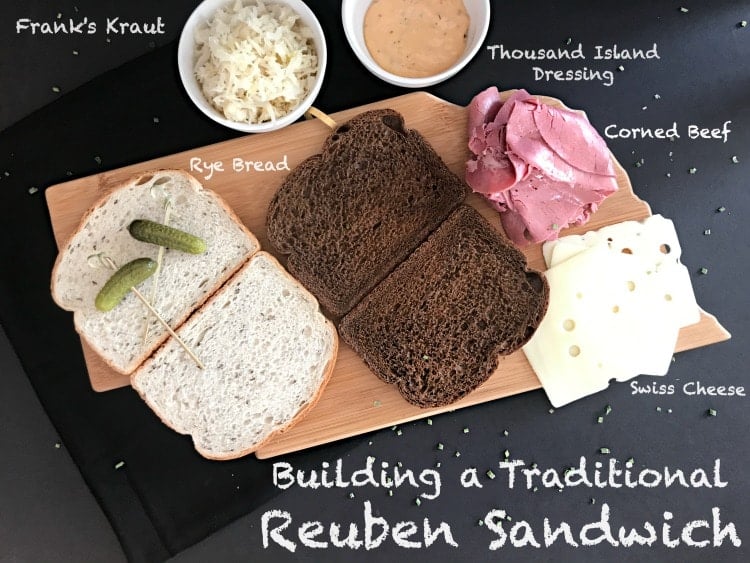 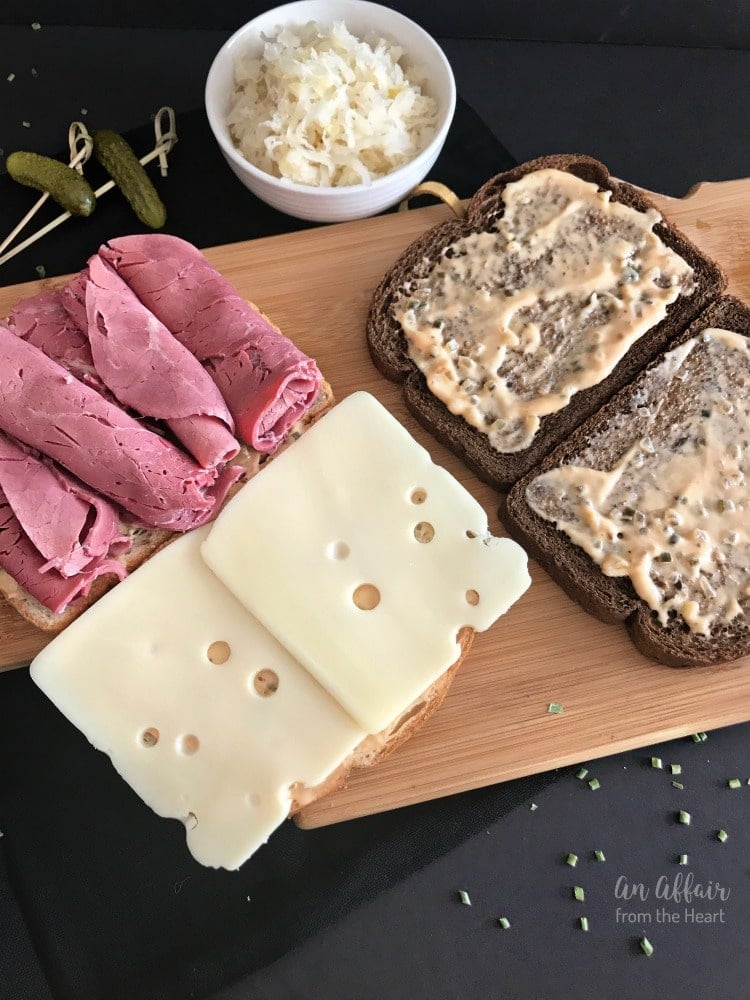 Slather dressing on both sides of the bread.  top one side with corned beef, the other with a couple of thick slices of Swiss cheese. 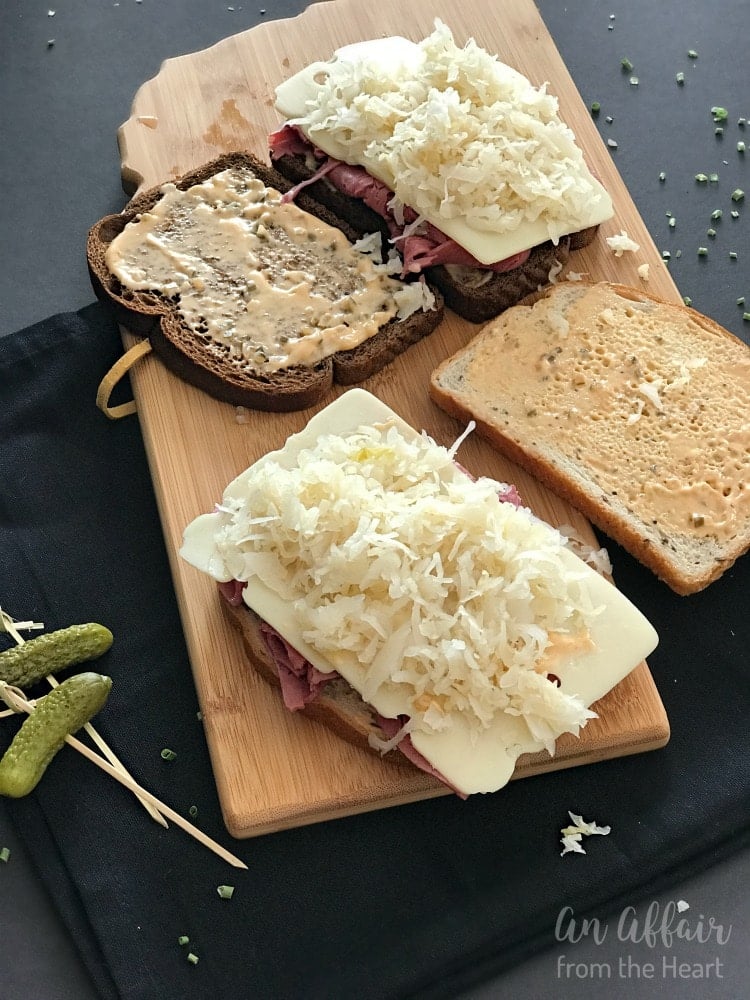 Now it’s time to add the Frank’s Kraut! Don’t be shy! Put a big mound of it on! 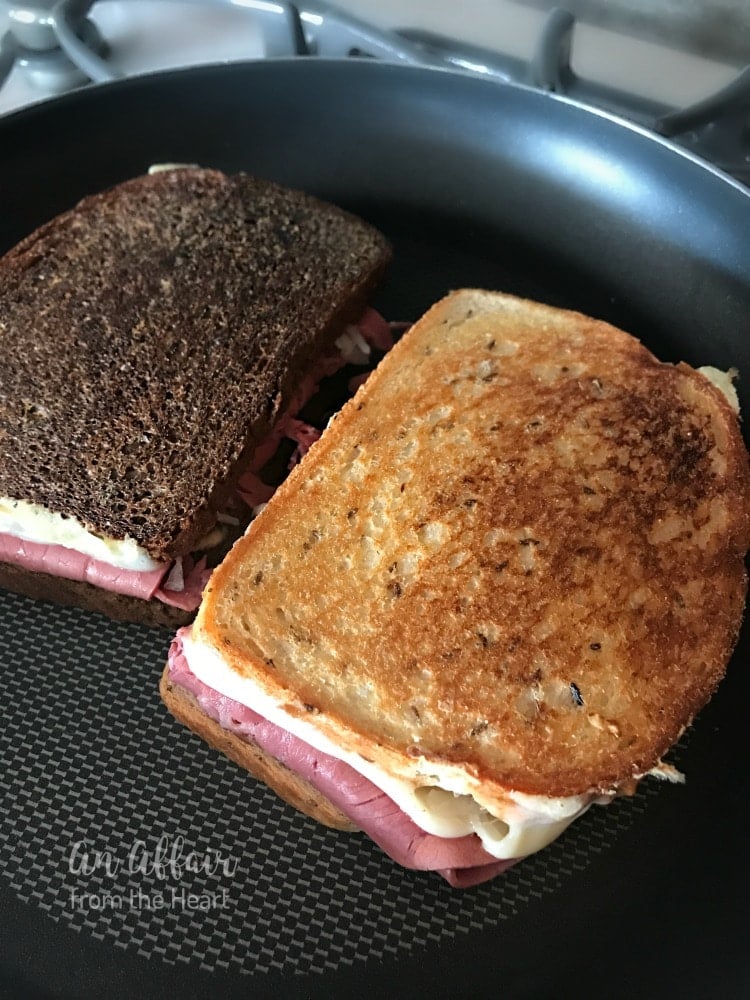 Heat your skillet up and butter the outside of both pieces of bread, just like you would for a grilled cheese.  Place in a hot skillet and get nice and golden brown on both sides, and get that cheese all melty and gooey.  Feel free to dollop on some more Thousand Island dressing before you serve it. 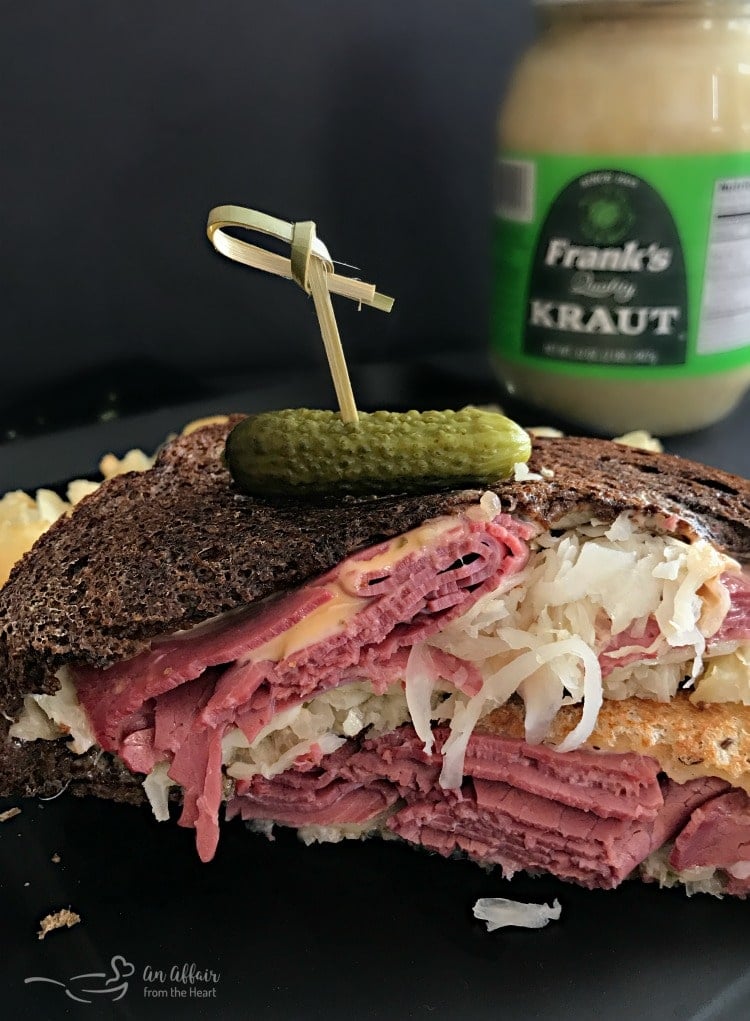 My friends, does it get any better than that?  Dive on in. 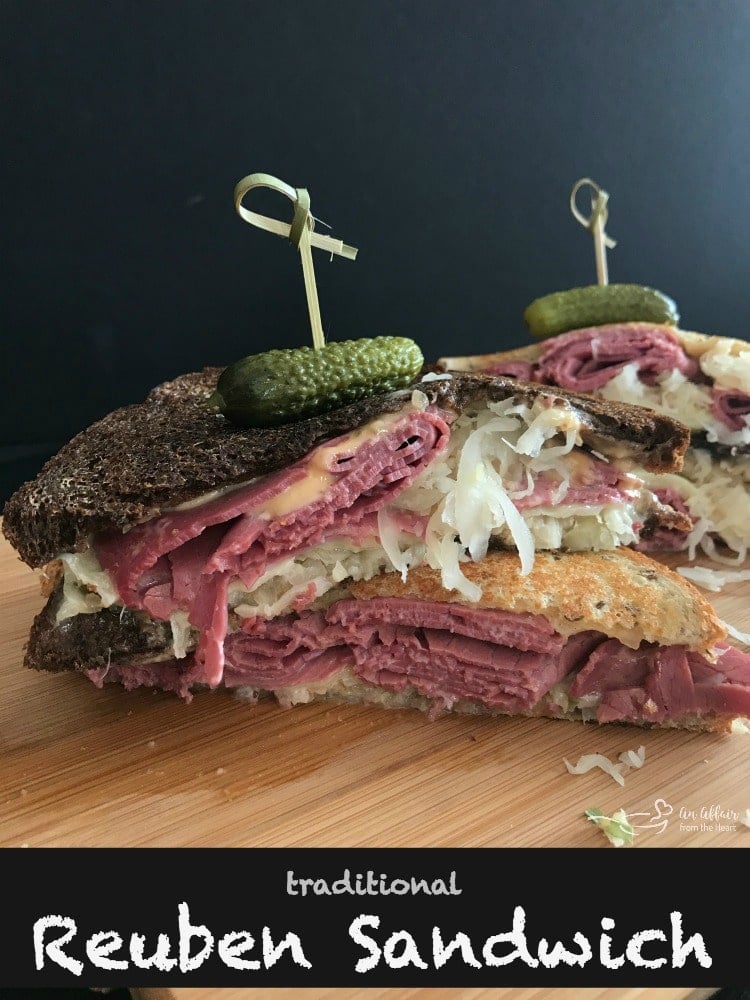 Who’s ready to make some Reuben’s and celebrate this historical sandwich with me?

Love Reubens? Want to know more? The Reuben actually has a couple of origin stories, it just depends on who tells it. Learn all about Reuben and how to Reubenize anything! 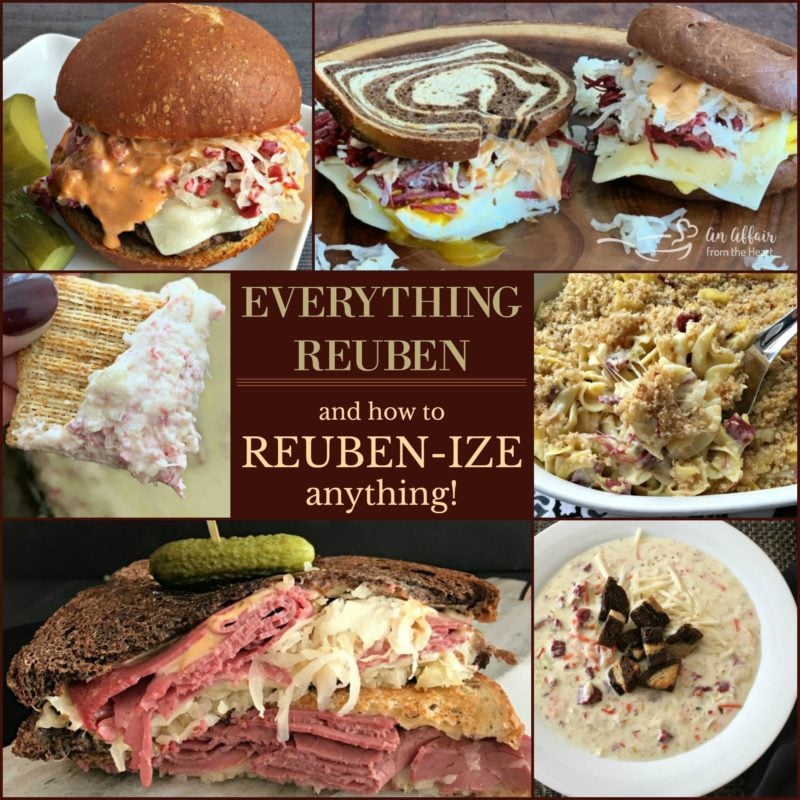 Hey, there! I am Michaela. I have been a stay at home Mom to my four children for a little over two decades now. I am a food blogger, dog lover, party thrower, gift giver, liver and lover of ... END_OF_DOCUMENT_TOKEN_TO_BE_REPLACED