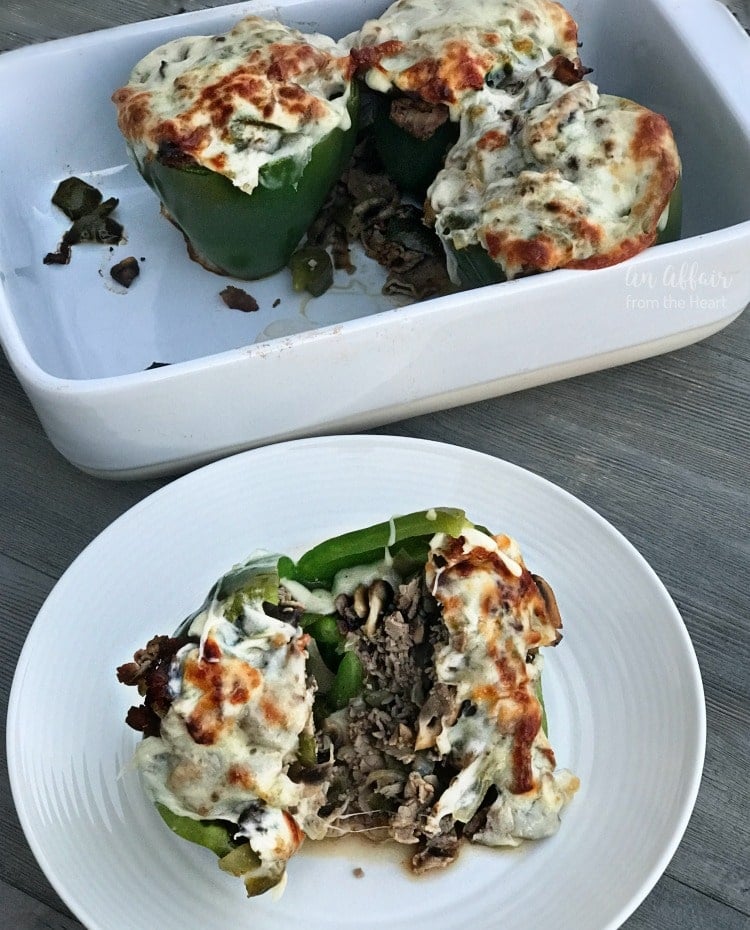 These Philly Cheese Steak Peppers have been one of my most popular recipes for four years running.  I originally posted this recipe in February of 2014.  It was time for a recipe re-do.  Today I am re-sharing them with you, with updated pictures and a slightly modified recipe using sliced cheese instead of shredded cheese, and a bit smaller portion.  Other than that, these are the same delicious Philly Cheese Stuffed Peppers many of you have grown to know and love. 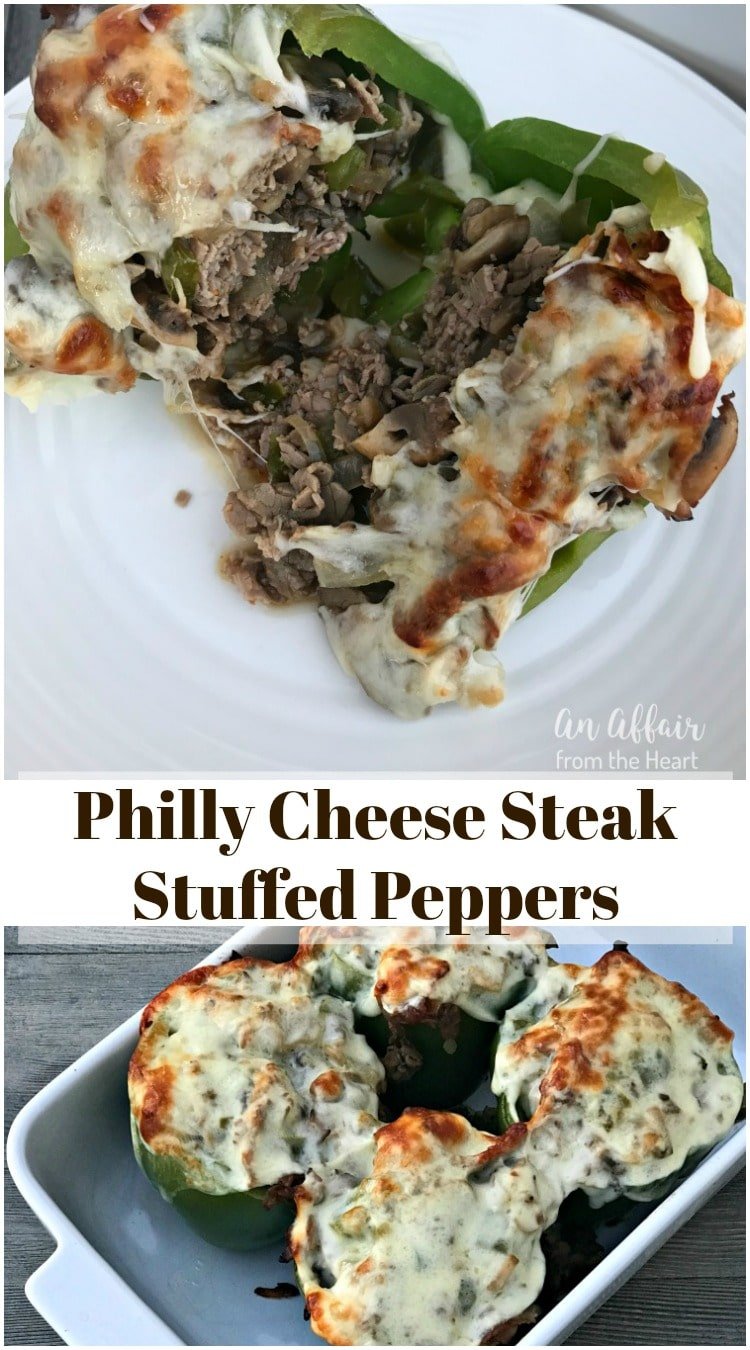 Most people have their favorite “bar food.” What’s yours? Mine would, hands down, be fried mushrooms and Philly Cheese Steak Sandwiches!  To the point where it is always a struggle for me to order anything else off the menu in that sort of atmosphere.  Why mess with a good thing?
One of my FAVORITE meals of all times? Stuffed Peppers.  It has been since I was a kid, and that hasn’t changed.  In order to not always sound like I am making the same thing for dinner all of the time, I’ve made different versions of my stuffed peppers.  Stuffed Pepper Soup, Stuffed Pepper Meatloaf, Stuffed Pepper Casserole, Stuffed Pepper Skillet, Stuffed Pepper Meatballs … You get the idea.  I am getting what I ultimately want for dinner without sounding completely redundant.  Right? 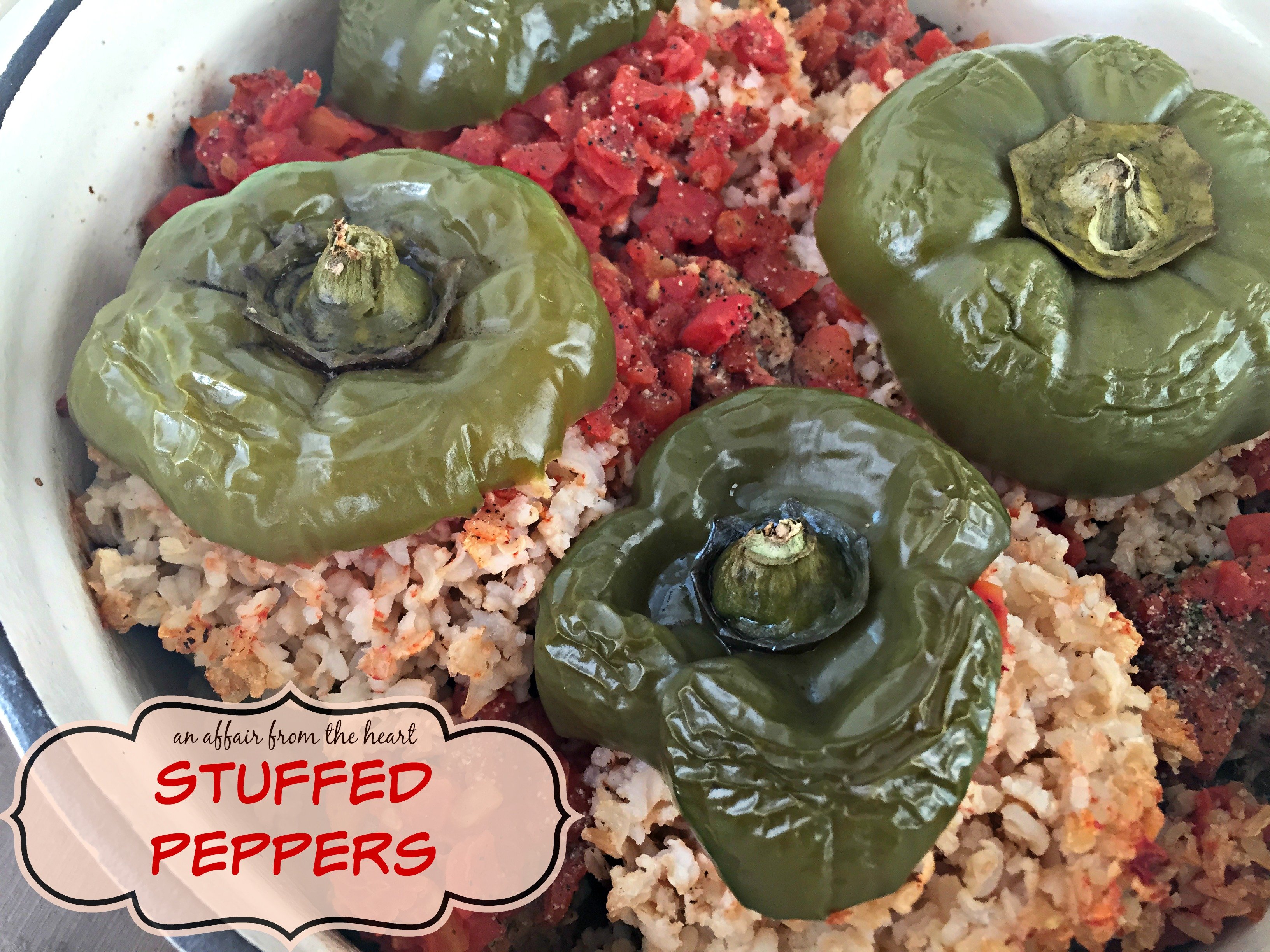 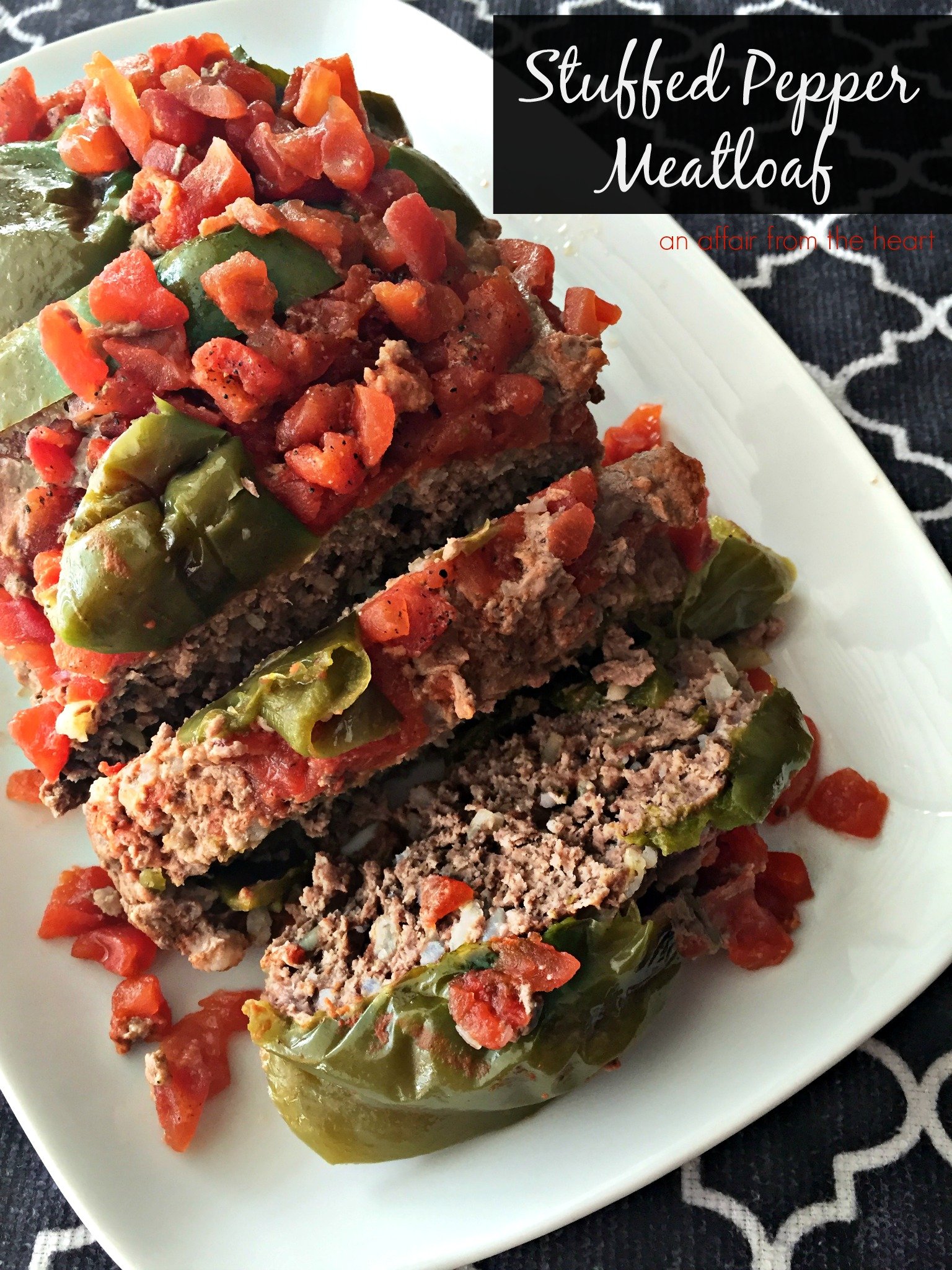 STUFFED PEPPER MEATLOAF – This meatloaf has all of the components of stuffed peppers, and all of the flavors, too! Folks, this isn’t your Mother’s meatloaf. 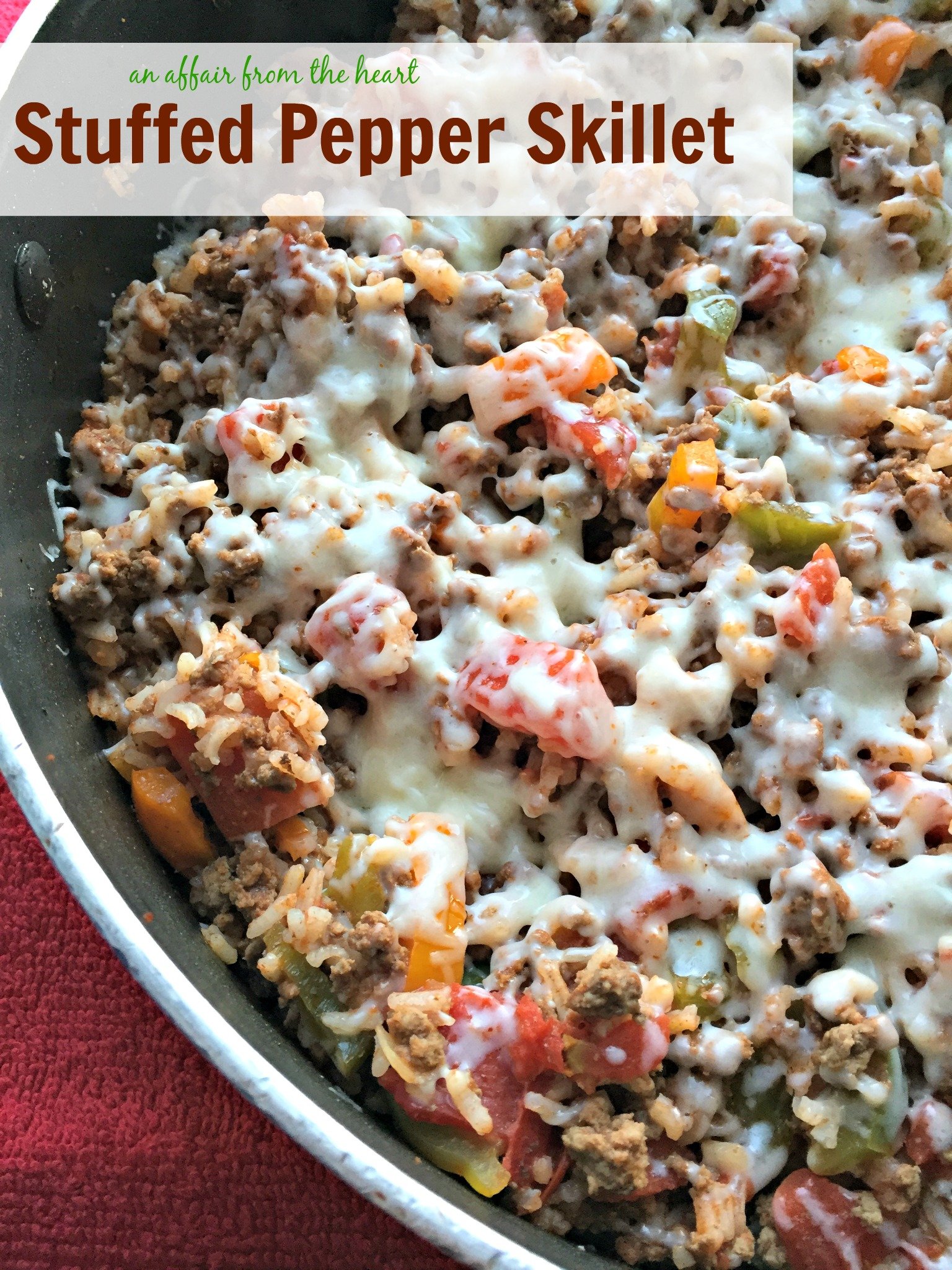 STUFFED PEPPER SKILLET – Stuffed Pepper Skillet has all of the flavors of traditional stuffed peppers, with hardly any work! Serve them right out of the skillet, with or without cheese! 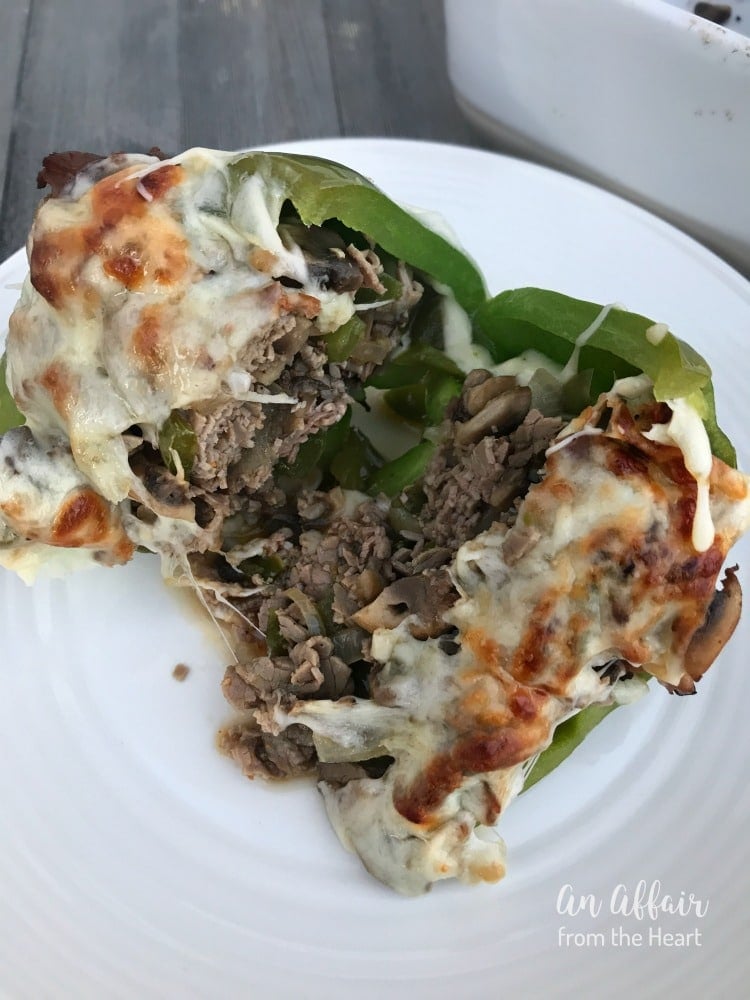 So, combining the two of my favorite things sounded like a win-win for me — Philly Cheese Steak Stuffed Peppers! You could use other colors of peppers, but I’ve always made them with green bell peppers, like traditional Philly sandwiches.  Aren’t they yummy looking?? Look at all that CHEESE. 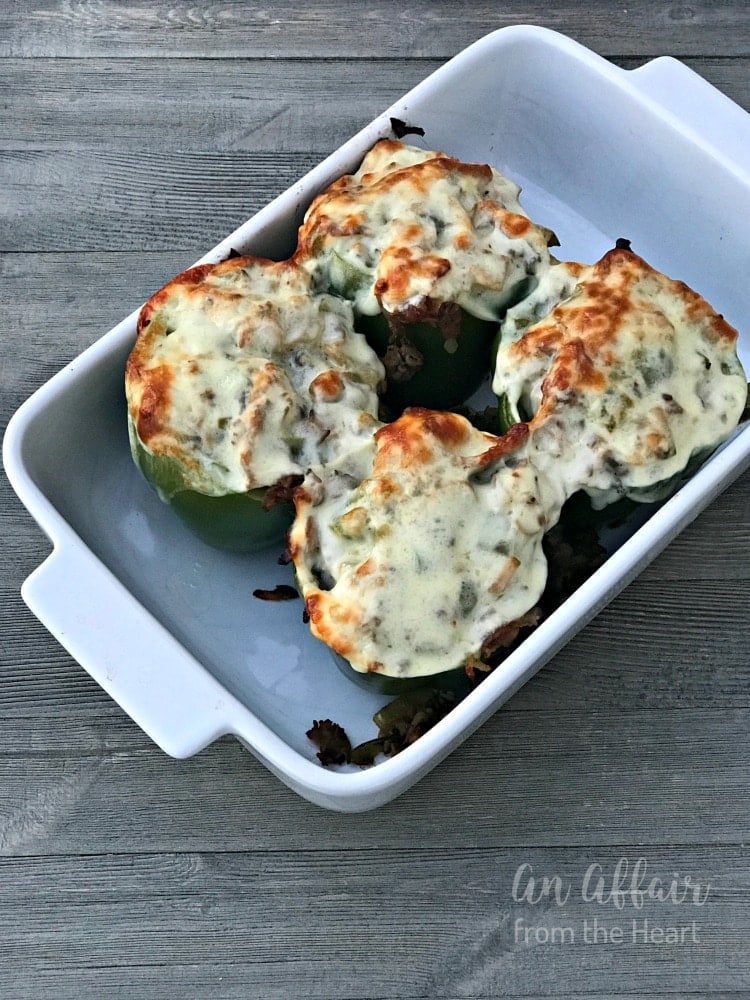 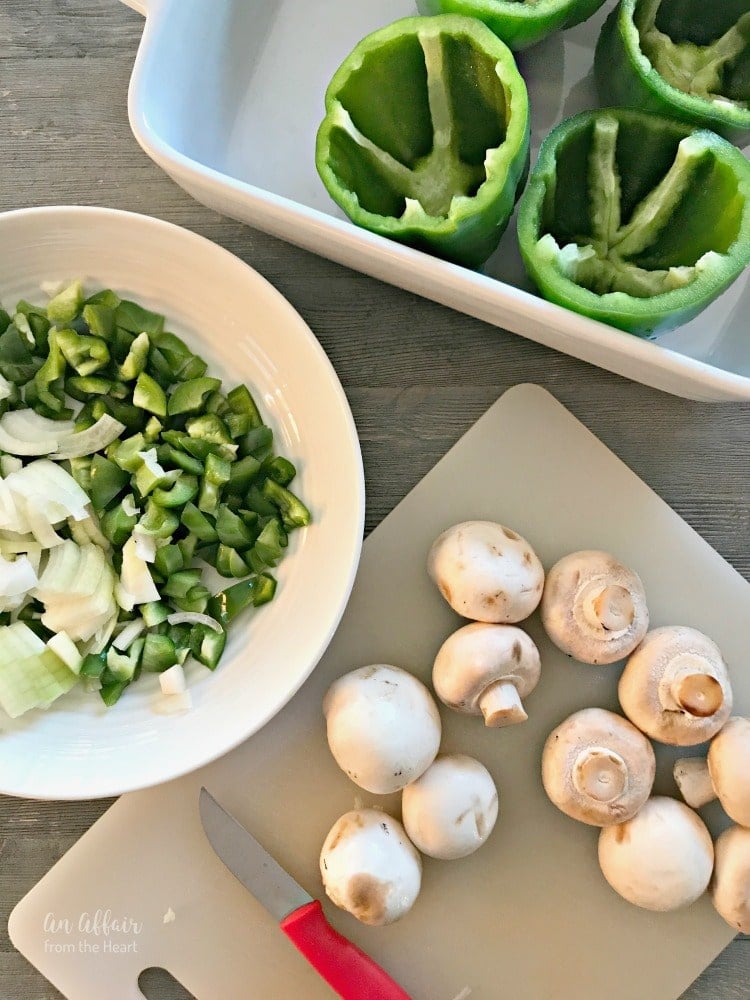 Cut the tops off of your bell peppers and clean out the inside, chop the pepper on that’s left around the stem, set aside.  Slice onion and mushrooms, set aside.
Slightly chop the roast beef, set aside. 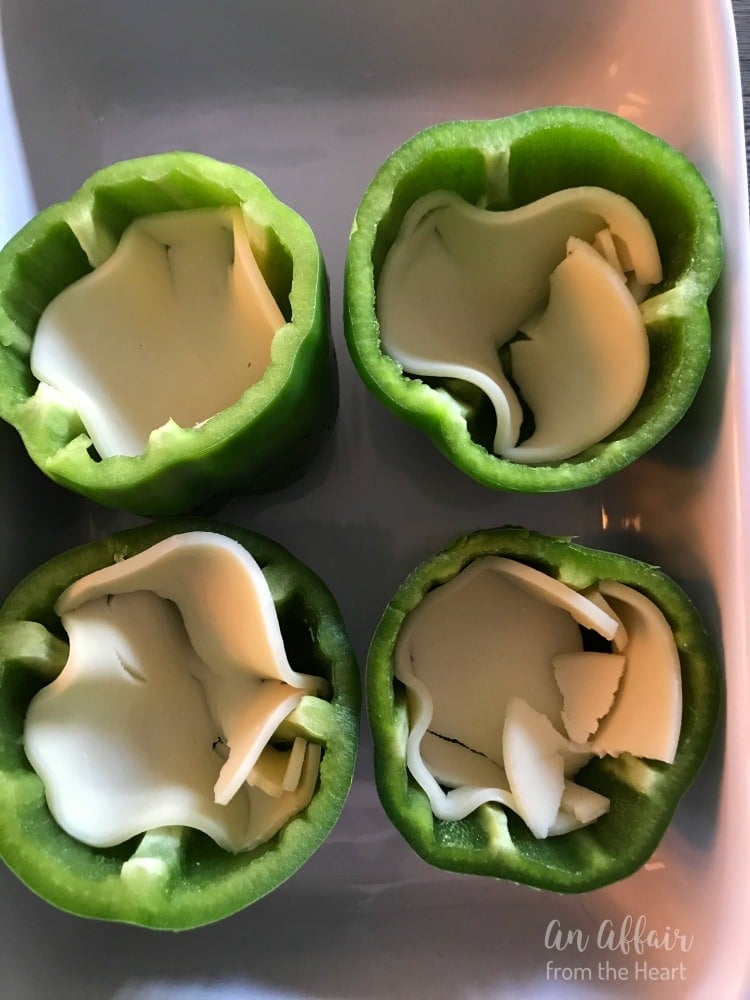 Preheat oven to 400 degrees. Place peppers in a baking dish prepared with non-stick cooking spray. Place a thick slice of Provolone cheese into the pepper — you can also substitute a generous “pinch” of shredded cheese. 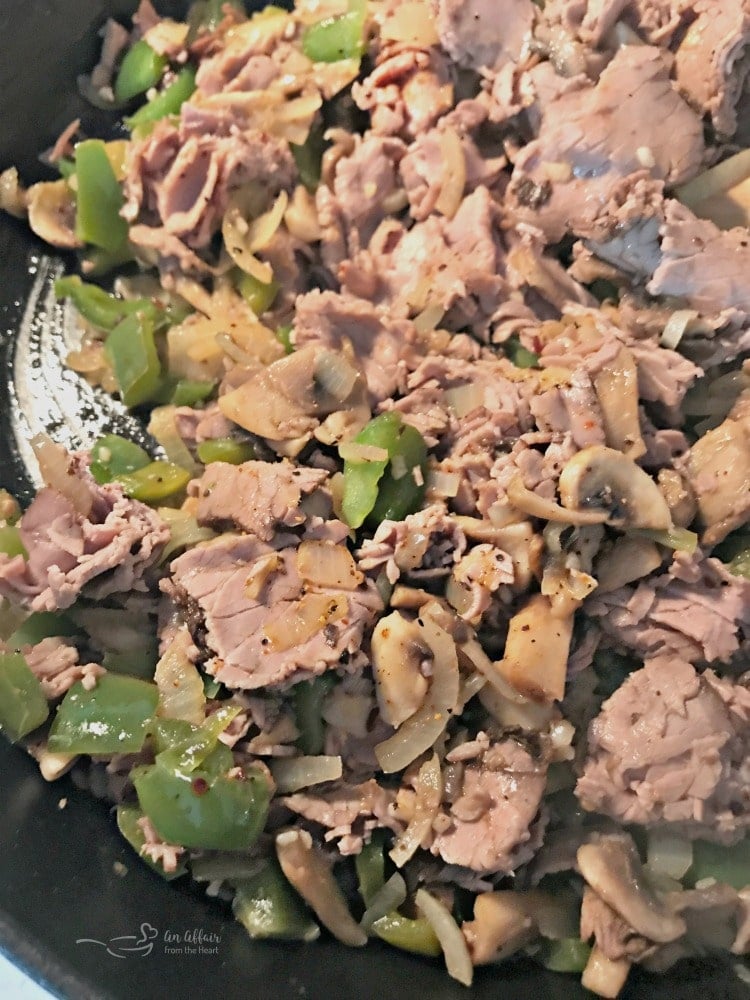 In a skillet over medium heat melt butter. Add garlic, mushrooms, chopped pepper and onion and cook until caramelized, about 20 minutes.  Add meat and cook for 10 minutes more. 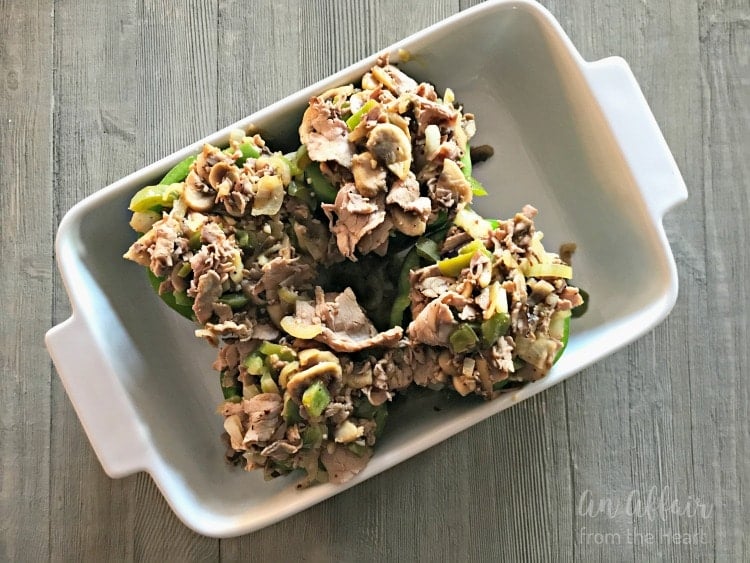 Divide meat mixture evenly between peppers, cover and bake for 20 minutes. Uncover, top each pepper with a slice of cheese and bake for 10 minutes more. 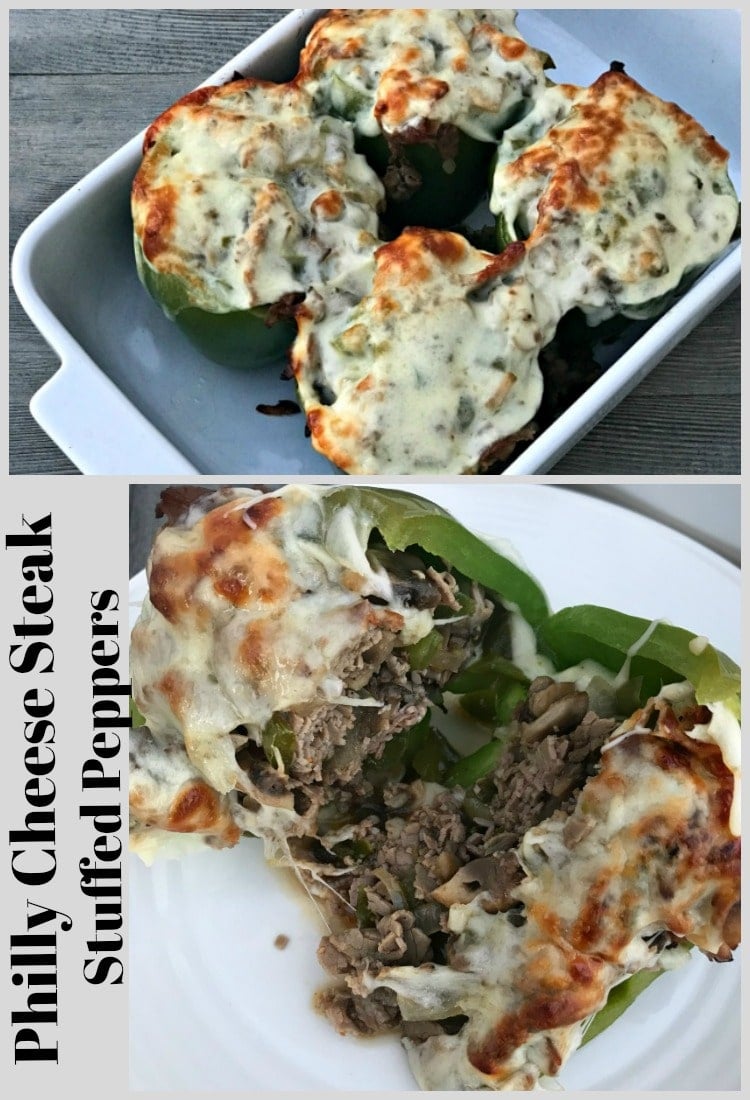 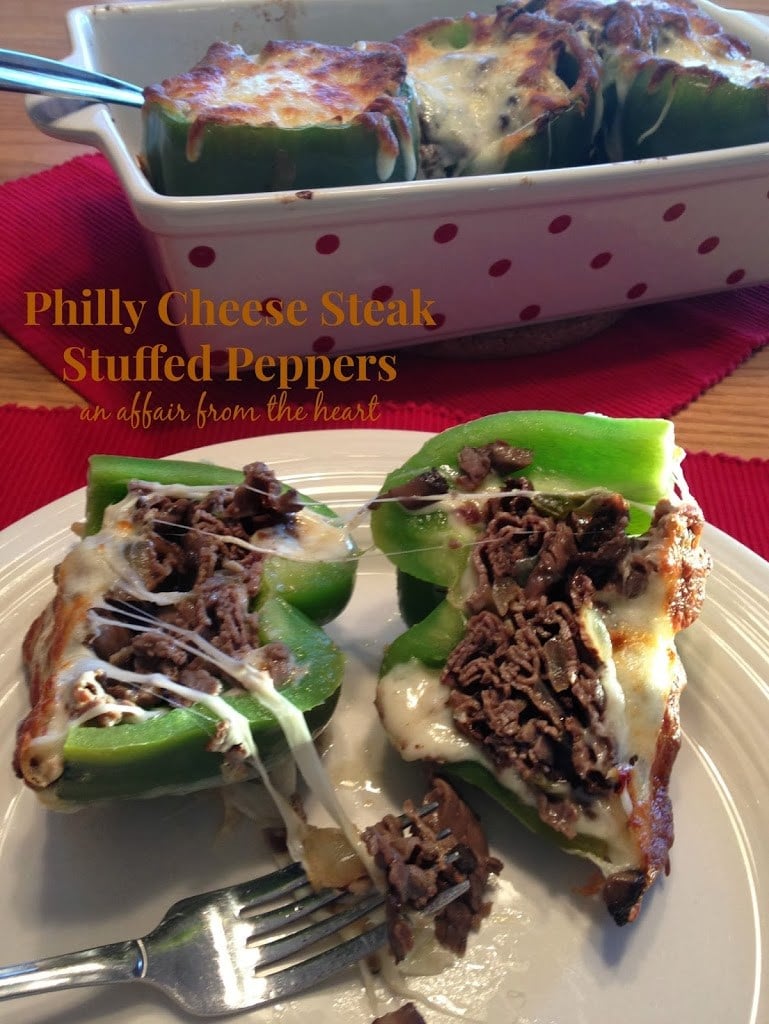 Look familiar?  Here is the original photo that may have brought you here to this post.  Regardless of what brought you here, I hope you enjoy this delicious low carb meal!

Hey! I’m Michaela, welcome to my kitchen!  While you’re here with me, I hope that you will find all sorts of simple and yummy recipes to share with your family. I pride myself on sharing tried ... END_OF_DOCUMENT_TOKEN_TO_BE_REPLACED