Bacon-wrapped dishes that offer endless variations. Look at all the possibilities! That common saying “everything goes better with bacon” certainly makes sense. Let’s face it. Even something kind of tasty becomes spectacularly delicious with a bit of bacon around it.  That is just the magic of bacon. Snacks wrapped with bacon satisfy every time. 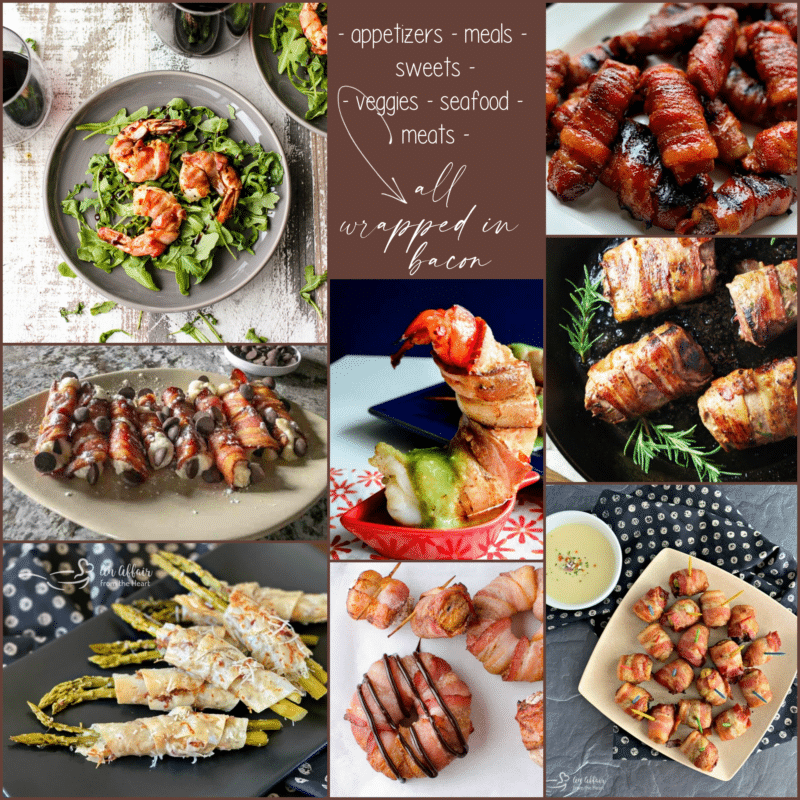 Bacon-Wrapped and ready to serve

When it comes to bacon wrap dishes, I think most people think of appetizers. You know, like crispy bacon around shrimp or asparagus with bacon. Don’t get me wrong, those are amazing. In fact, those disappear from appetizer platters fast. But why not think outside the bacon wrap box?   Time to expand the bacon horizons… blaze a new trail… and find more recipes to wrap bacon around. 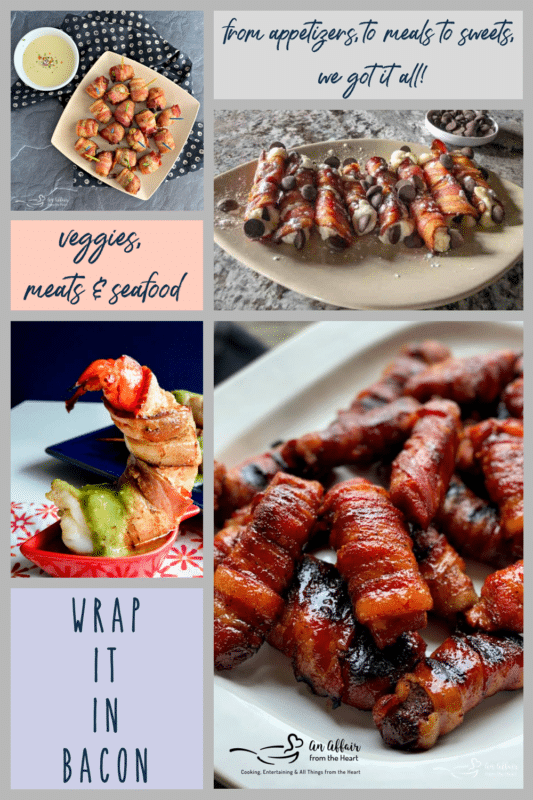 What can you wrap bacon on?

Get that bacon around beef, fish, poultry, shellfish. Or, take the bacon around veggies or even around fruits. Indeed, plums (prunes) with bacon around them are a wonderful treat from eastern Europe. Finger foods and party appetizers featuring bacon mean no leftovers.

Tips & Tricks for Tying bacon around meats and poultry

When you plan on wrapping meat in bacon, you have to take into account a few things. How thick should the bacon be? What kind of bacon works best? To use toothpicks or not? Different meats cook at different speeds and temperatures. So what works great for chicken might not be ideal for bacon on beef.

So, for wrapping bacon around a pork tenderloin, go with a bit thicker cut of bacon. The bacon keeps the moisture in the tenderloin while it cooks. However, if you are doing bacon around some chicken skewers then go with a much thinner slice of bacon. Chicken cooks quickly. With beef, it depends.

Are you wrapping the bacon around a tenderloin or a kabob of cubed steak? Use the thicker slice for the former and the thinner for the latter. 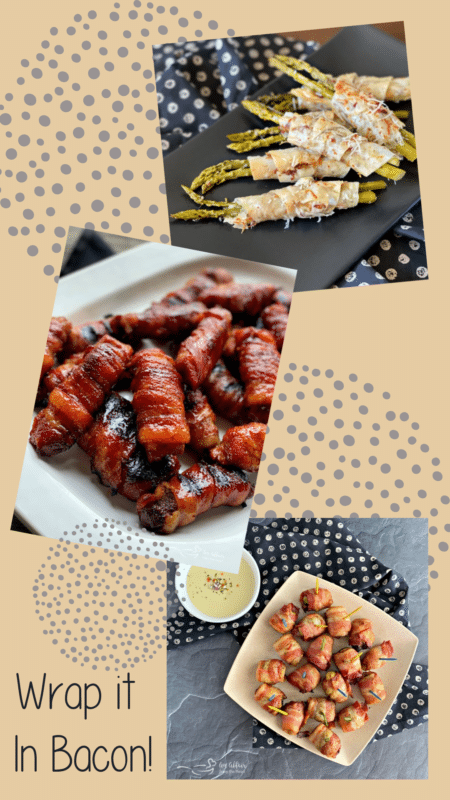 How do you make crispy wrapped bacon things?

The goal with bacon wrap food is simple. The bacon must crisp up right when the meat, veggie, or fruit, or whatever finishes at the same time. Sometimes, it is necessary to parboil or par-bake the bacon first to give it a head start. Most veggies and fruits benefit from some bacon prep.

I know it sounds weird to parboil bacon, but the goal is just to get the cooking started and make sure the bacon is fully cooked. Also, you don’t want the bacon to take so long cooking that your veggie or fruit is way overcooked along the way. If you don’t want to parboil, then par-baking achieves the same result. Let the bacon cook through, but take it out and let it cool before it starts to brown and crisp up.

Be careful and let it cool first. If you wrap with hot bacon then you will be cooking things before you even get everything in the oven.

How do you wrap things in bacon without toothpicks?

You don’t have to go through the trouble of using a toothpick unless you want to. As long as the bacon wraps around completely and you can hold it in place with the weight of the contents you are set. Once the bacon begins cooking and gets crispy enough then it will hold the shape and stay on. 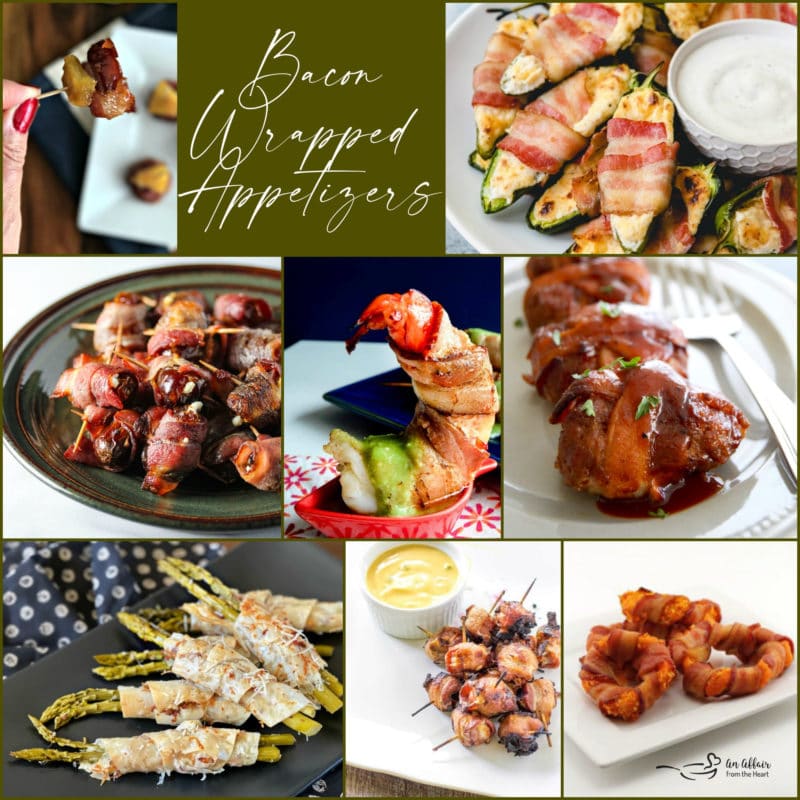 I think most people think about bacon wraps for appetizers, finger foods, and snacks. Which makes sense. A little bit of bacon around most anything makes it go from “maybe” to “can’t wait”. Here are a few suggestions for easy bacon appetizers. 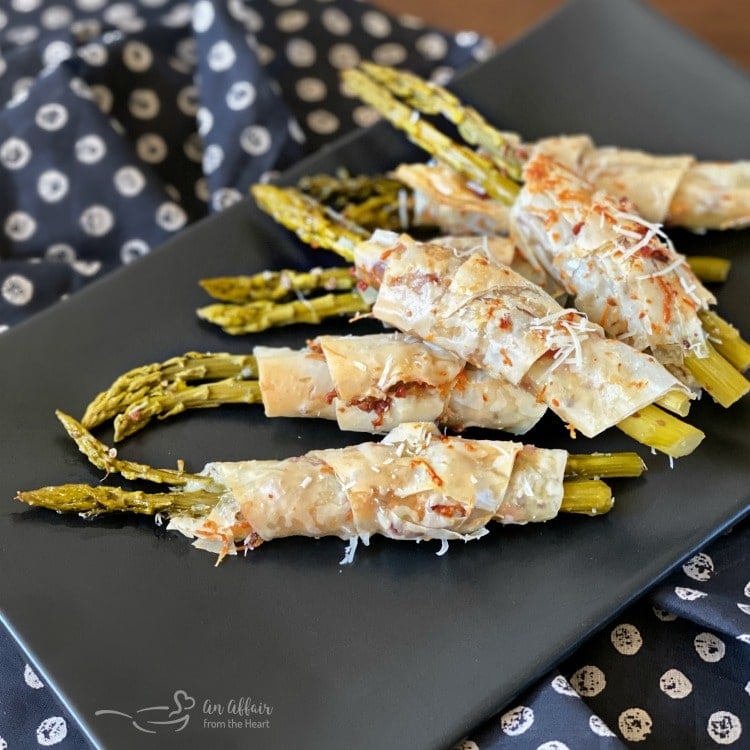 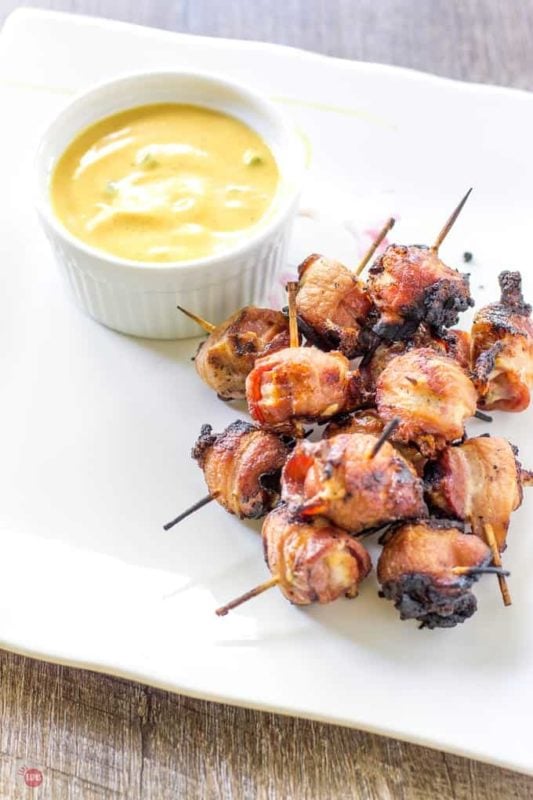 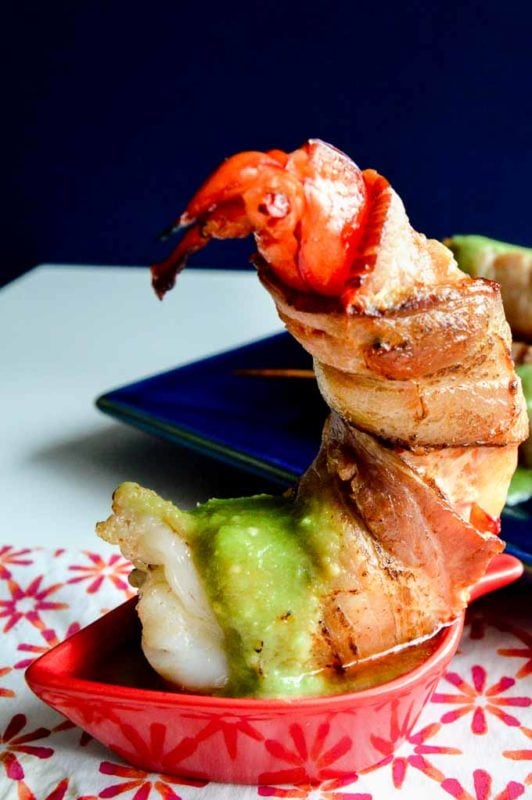 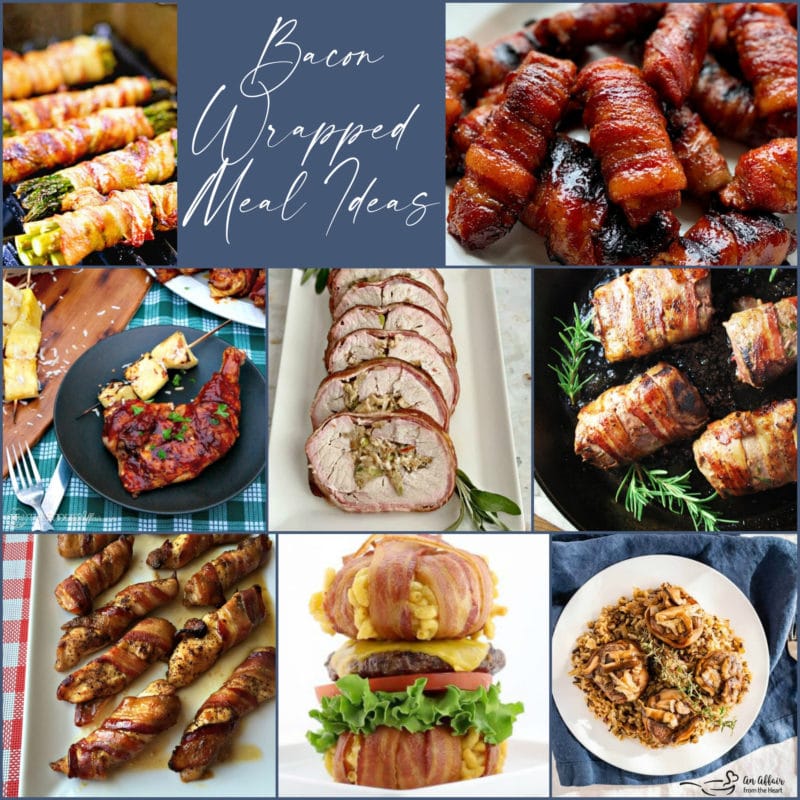 Although most people use wrap bacon dishes for appetizers, there are plenty of main courses to do too. Remember, bacon makes everything better, right? 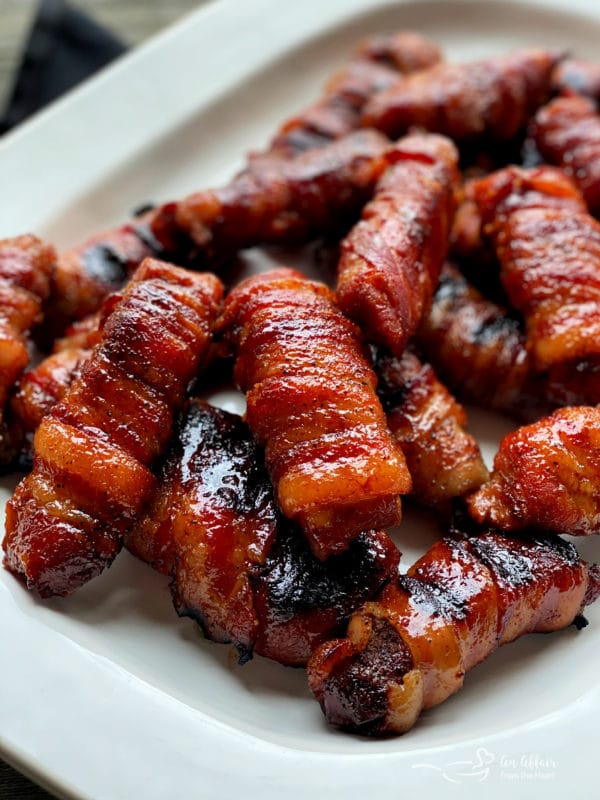 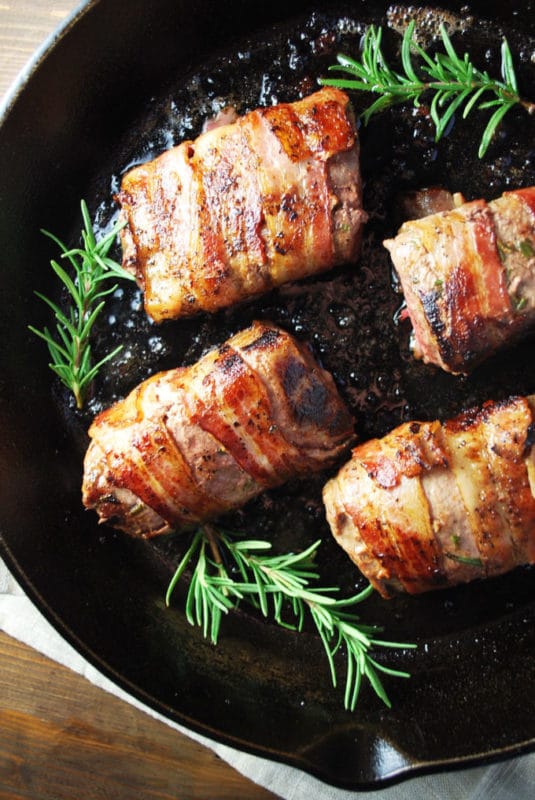 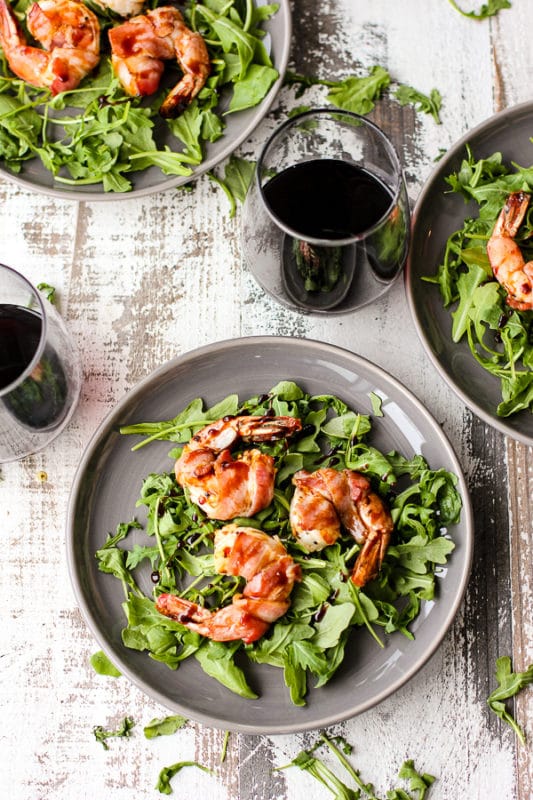 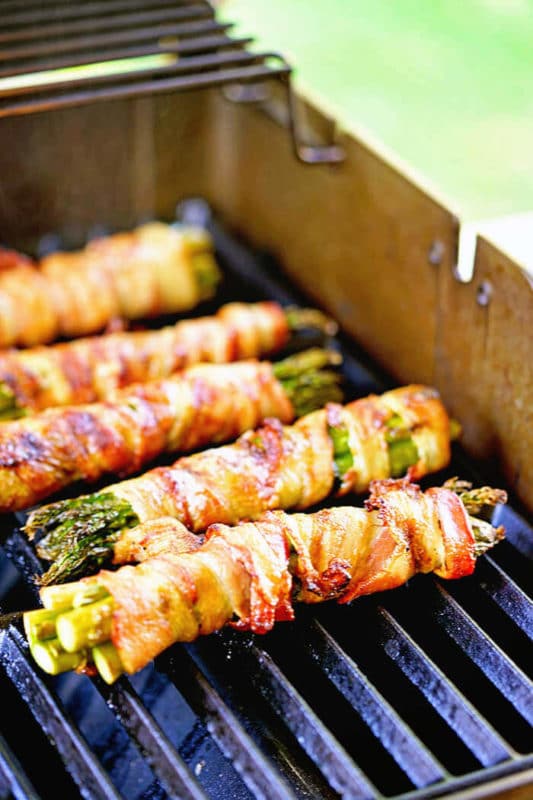 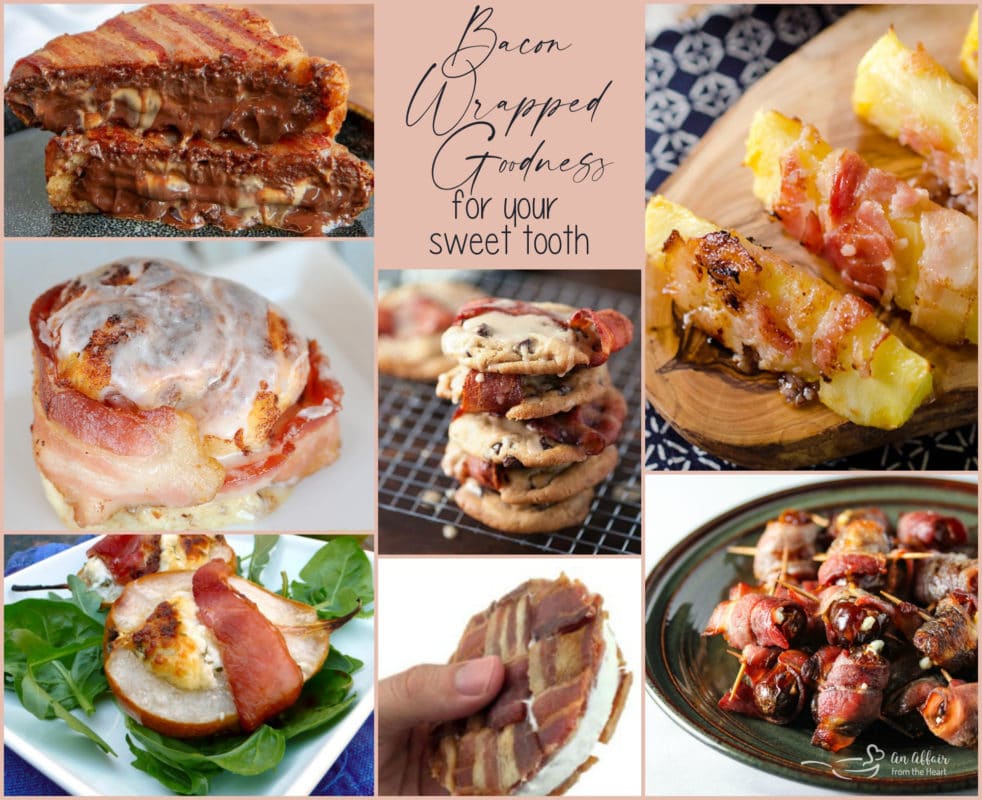 You can even do bacon wrap dishes for savory desserts. You might get a few looks like “what the heck will you NOT wrap bacon around?” but pay no mind. These bacon wrap dessert recipes work just as wonderfully as any wrapped bacon appetizer or main course will.

Hey! I’m Michaela, welcome to my kitchen!  While you’re here with me, I hope that you will find all sorts of simple and yummy recipes to share with your family. I pride myself on sharing tried ... END_OF_DOCUMENT_TOKEN_TO_BE_REPLACED