When I started planning for my son’s graduation party almost a year ago, the one thing I knew we would have was Mexican food.
He is truly Mama’s boy when it comes to his food tastes!
Maybe it’s all of the extra spicy Mexican I ate when I was pregnant?
Our Menu:  Taco/Nacho Bar
taco meat
soft and crunchy taco shells
nacho cheese
Mexican rice
re-fried beans
chips and salsa
and all of the trimmings to top off your creation
(lettuce, tomatoes, olives, shredded cheese, jalapenos, sour cream)
Some of you may know that my husband drives a dirt late model race car.
My son, Spencer, is his right hand in our shop and at the races. 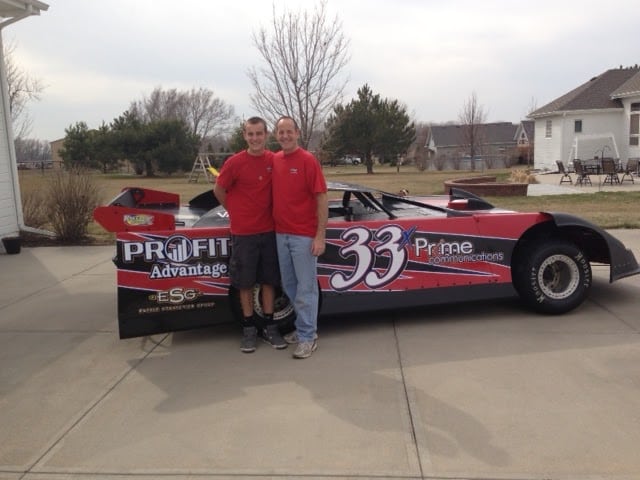 my husband and Spencer in front of his car
We decided that due to Mother Nature and her crazy cold front ways this Spring, that it would be cool to have his party in our building.
Then the rest of my ideas were born!
I played on his love of racing and his other love, fishing.
I wanted some sort of centerpiece, and I wanted it to be fit for a boy.
This is what I came up with: 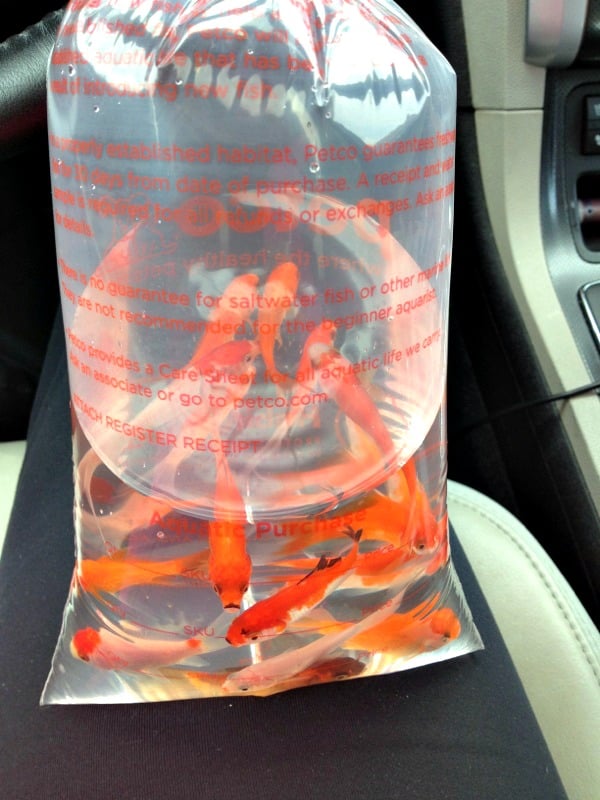 Do you suppose they know they are about to become a centerpiece?? 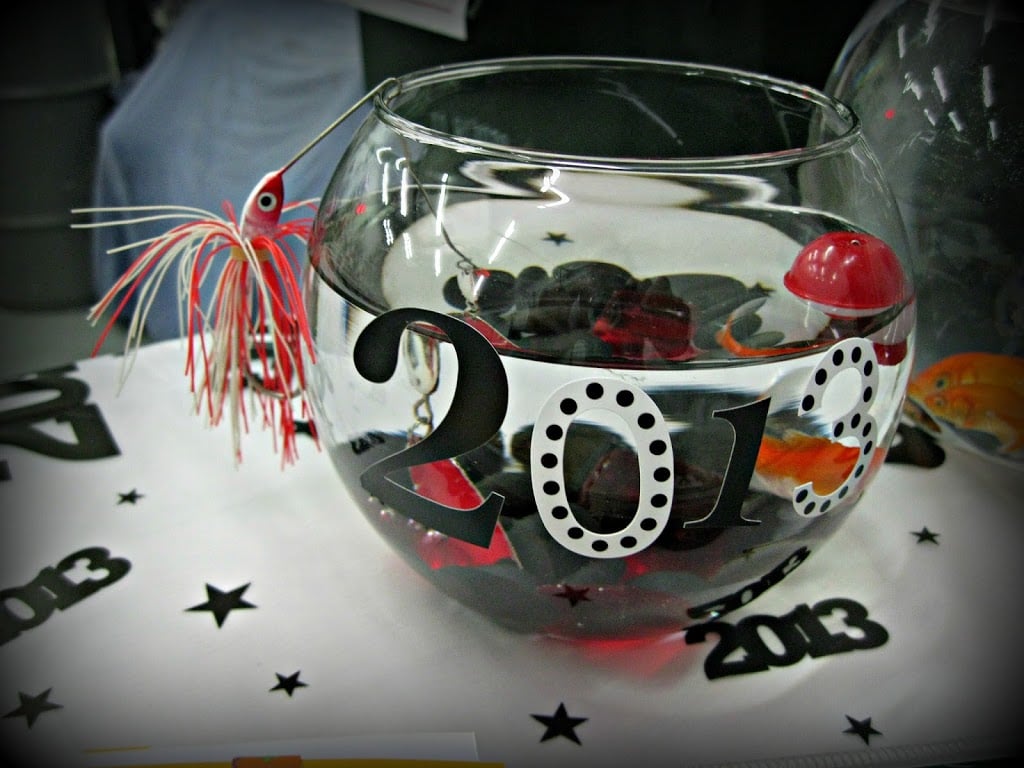 I bought small fish bowls and rocks in his school colors.
I found fishing lures also in their school colors, and red and white bobbers.
I dug out my stash of scrapbook numbers and added a 2013 to each bowl.
Hung the lure off the side, floated the bobbers on the top and added a gold fish to each bowl. 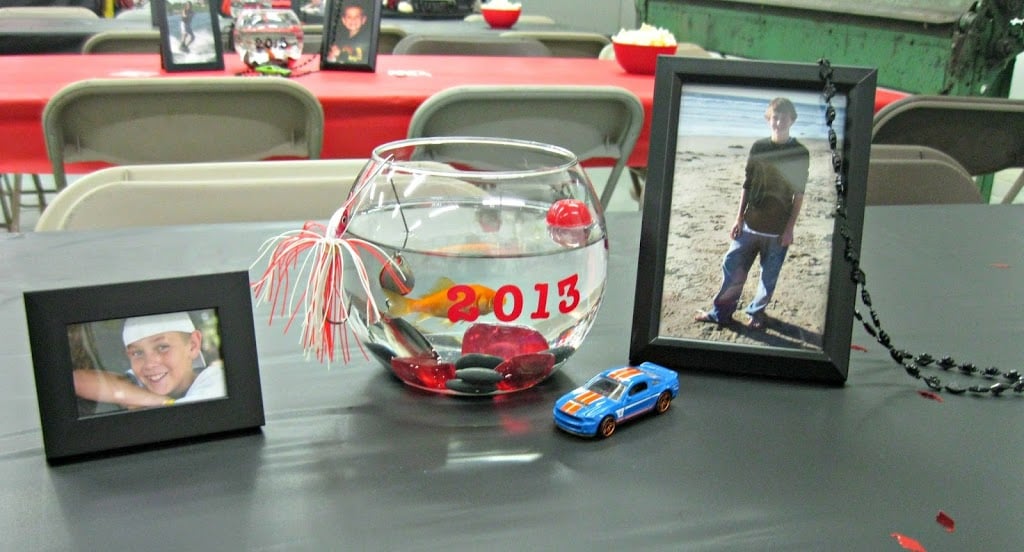 I also had many black picture frames that I filled with pictures of Spencer at different ages.
Added a few Hot Wheels, some graduation beads and confetti, and my tables were decorated! 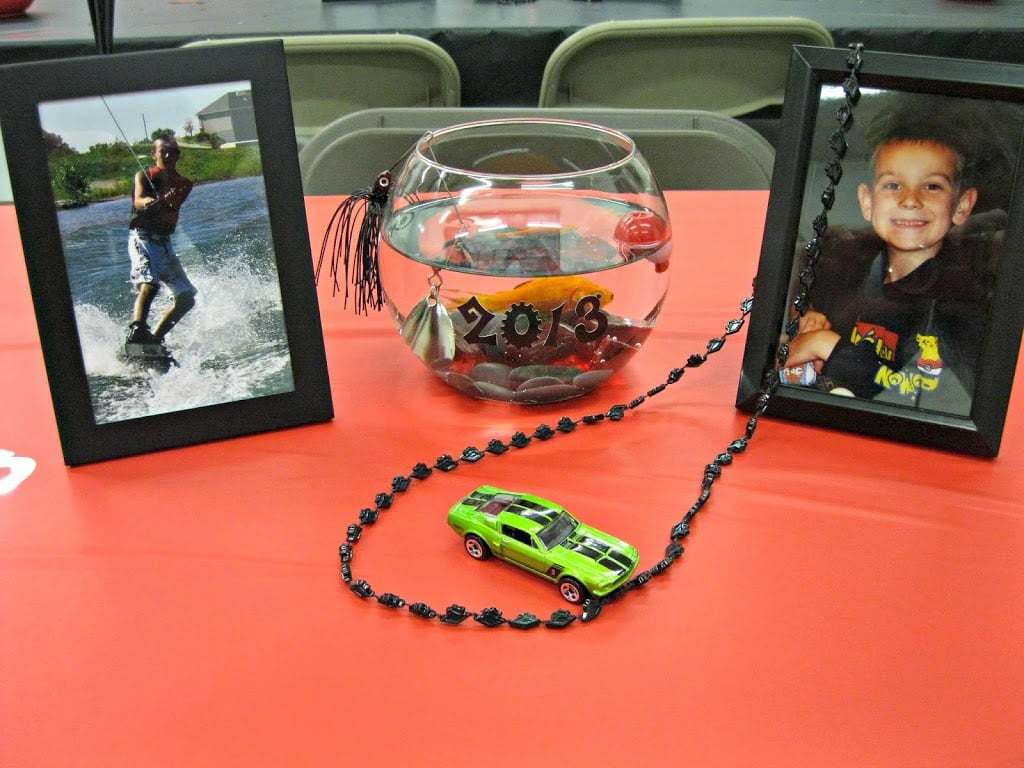 each table looked slightly different.
I alternated red and black table clothes on the tables.
The head table had a white table cloth with an overlay of a clear one with 2013 in black.
We had a large framed and matted photo for guests to sign and his scrapbook filled with photos from each year of school, Pre-School through senior year. 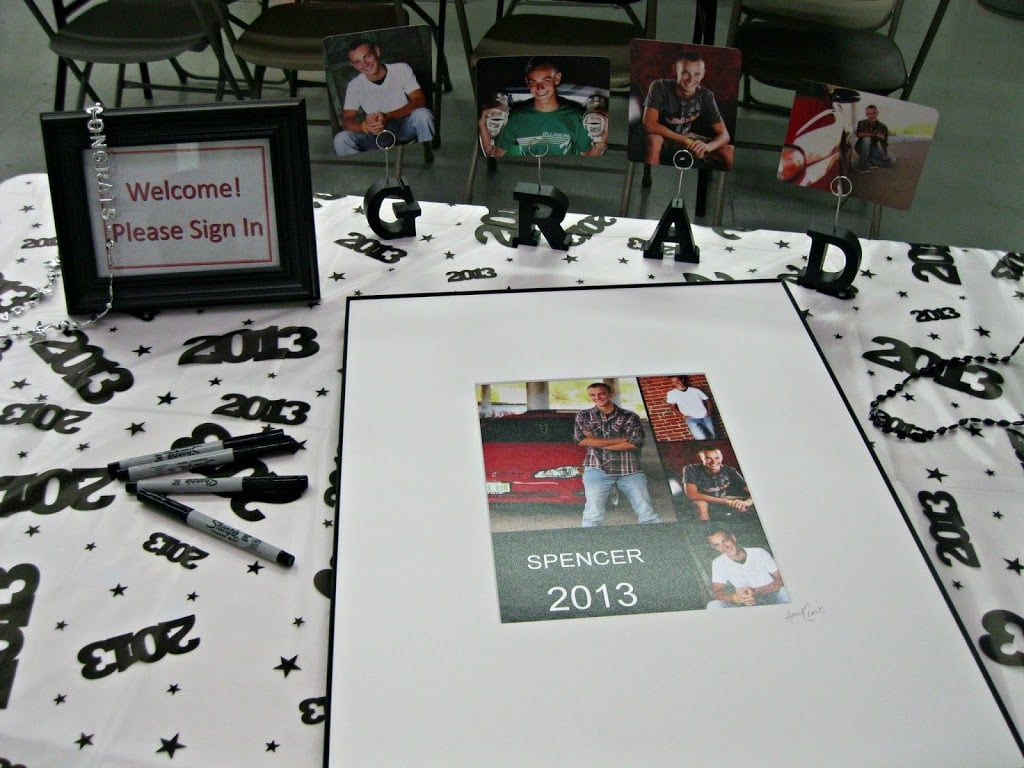 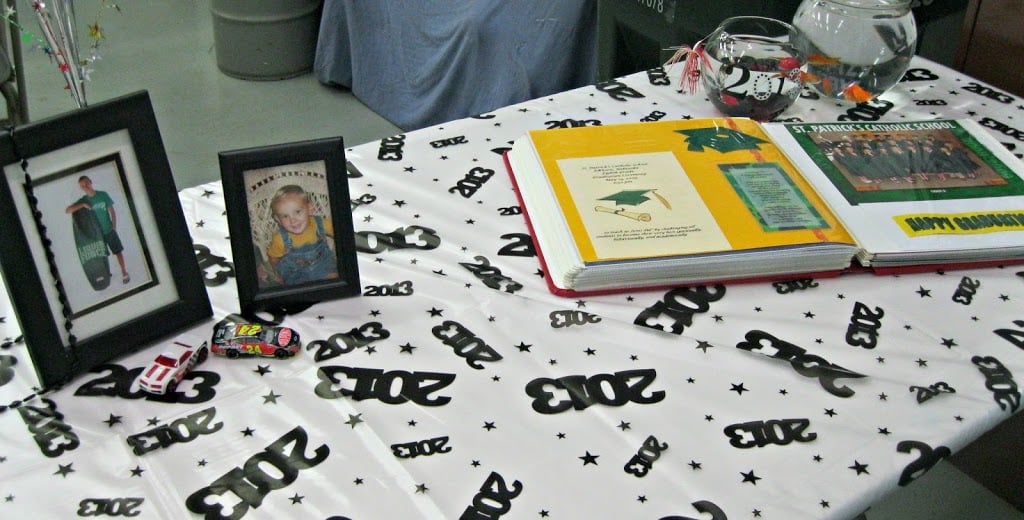 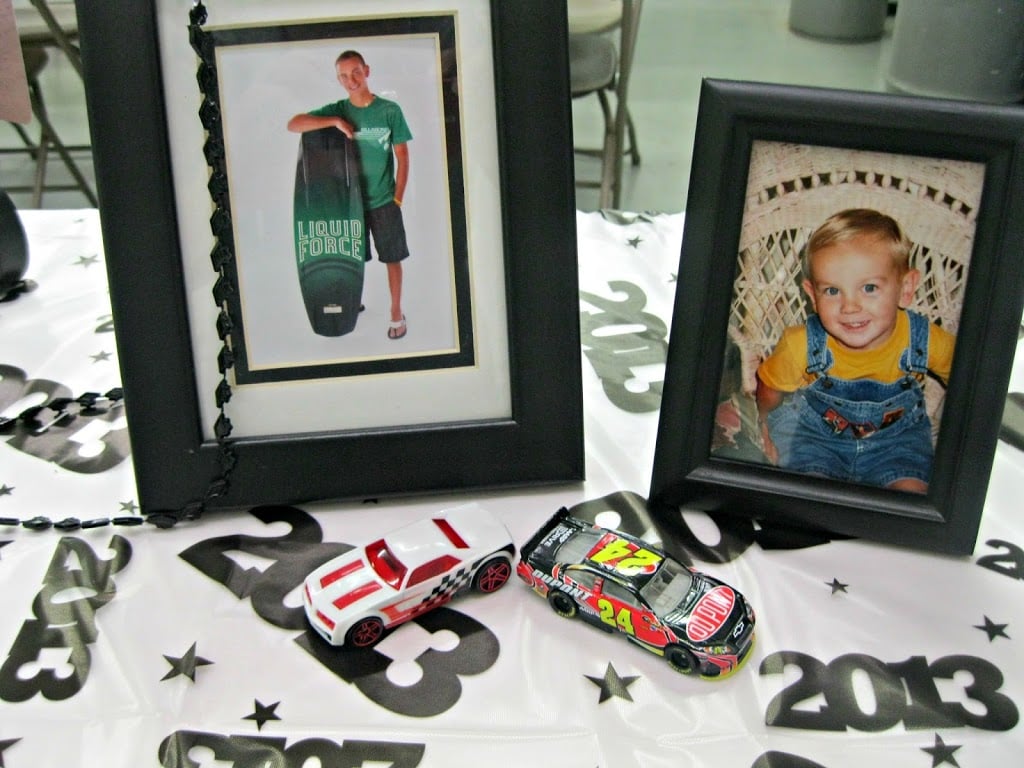 In order to keep guests from bunching up in the doorway, we had the gift/card table inside, close to the drinks and the food.

the gift table
You cannot tell from this photo above, but the gift table and the dessert table were both round.
Last but not least we had the table of desserts.
I decided to do all sorts of bars.
I did a round table, so people could walk around it.
I used tiered plate holders with desserts, and had back up ones to put in their place. 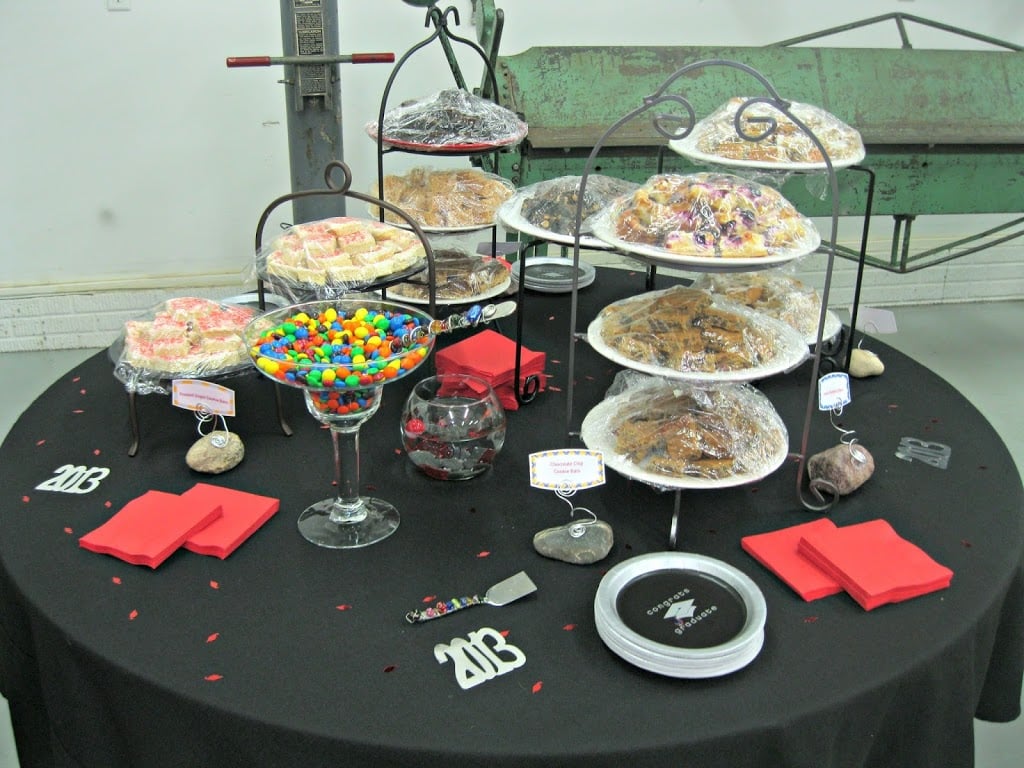 Keeping with the Mexican theme, I added a large margarita glass filled with assorted M&Ms. 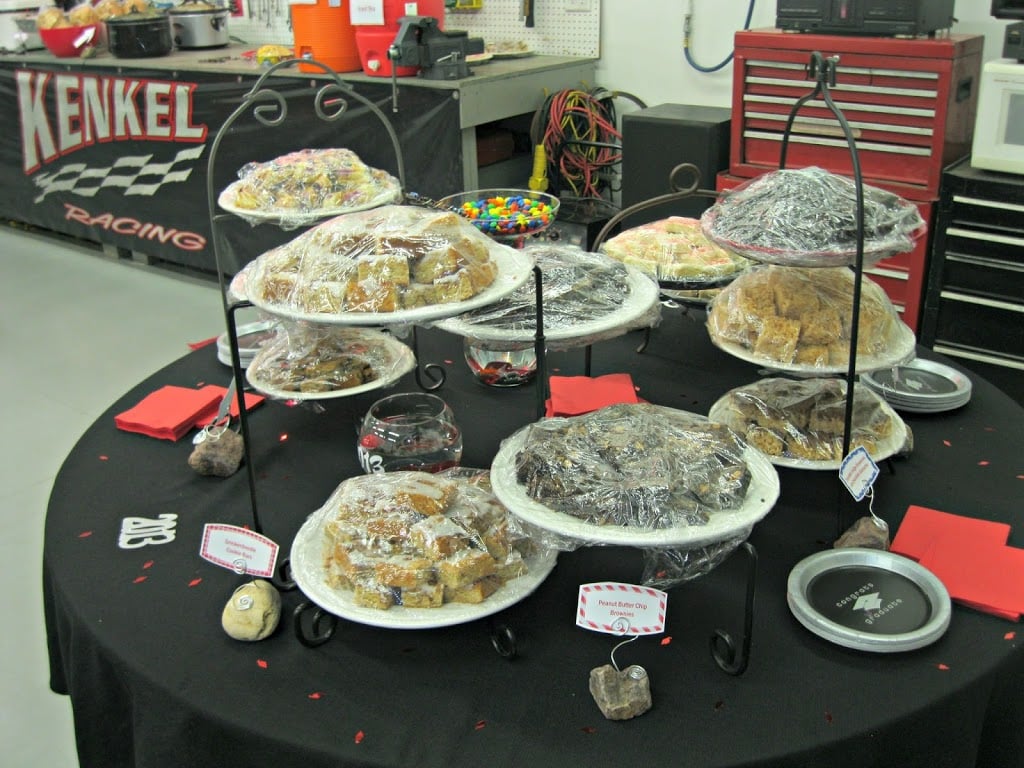 I used the rocks I made for card holders at a past party to show what each dessert was.
I made them for a Peanuts Themed Birthday Party.
They worked great with the fishing theme! 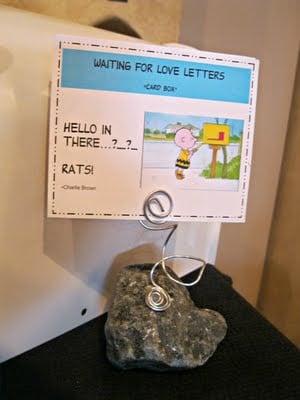 this is a close-up shot of the river rock swirled place card holder I made and re-used.
Here is a list of the desserts, you can click on each one to be taken to it’s recipe blog page.
Lemon Blueberry Crumb Bars
Chocolate Brownies with Chocolate Ganache
(I made a box mix brownie and topped with this ganache, they were decadent and the first bar gone!
Nestles Chocolate Chip Cookie Bars
(from the chocolate chip package)
Chocolate Peanut Butter Chip Brownies
(box brownies with 1 bag of milk/peanut butter chips and 1/2 bag of peanut butter chips)
Iced Snickerdoodle Bars
Frosted Sugar Cookie Bars
(decorated with his school colors!)
My Mother-in-Law made Rice Krispy Treats, but here’s a twist on those:
Cake Batter Rice Krispy Cupcakes with Marshmallow Butter Cream 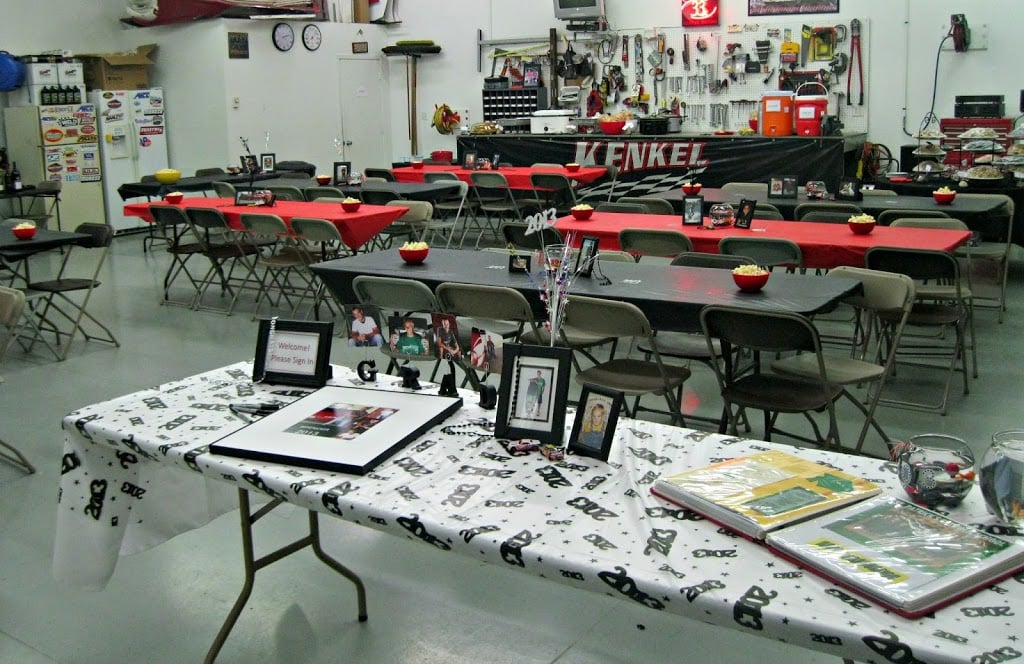 A view from the front door of the race shop, you can get a better idea of the layout.
All of the food was set up along the work bench. 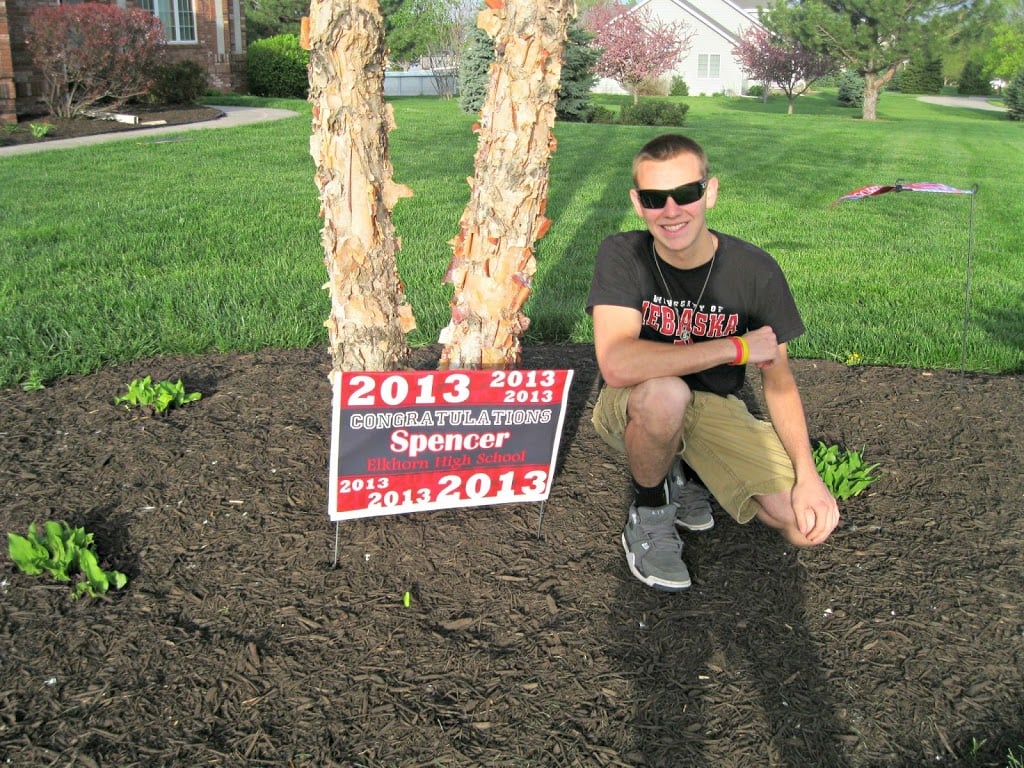 My son, Spencer, the guest of honor on his last day of High School. 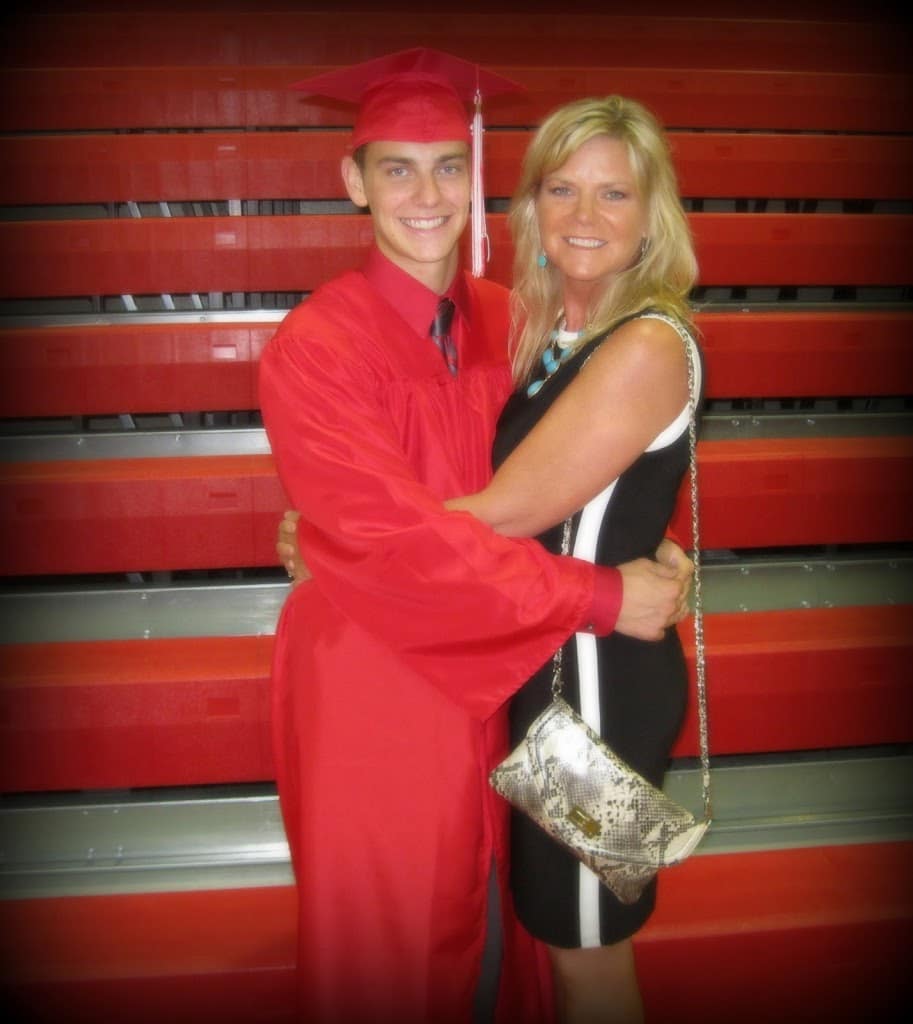 Me and Spencer.  I am so proud of you, buddy!!
Love you SO MUCH!!
xxoo

Hey! I’m Michaela, welcome to my kitchen!  While you’re here with me, I hope that you will find all sorts of simple and yummy recipes to share with your family. I pride myself on sharing tried ... END_OF_DOCUMENT_TOKEN_TO_BE_REPLACED