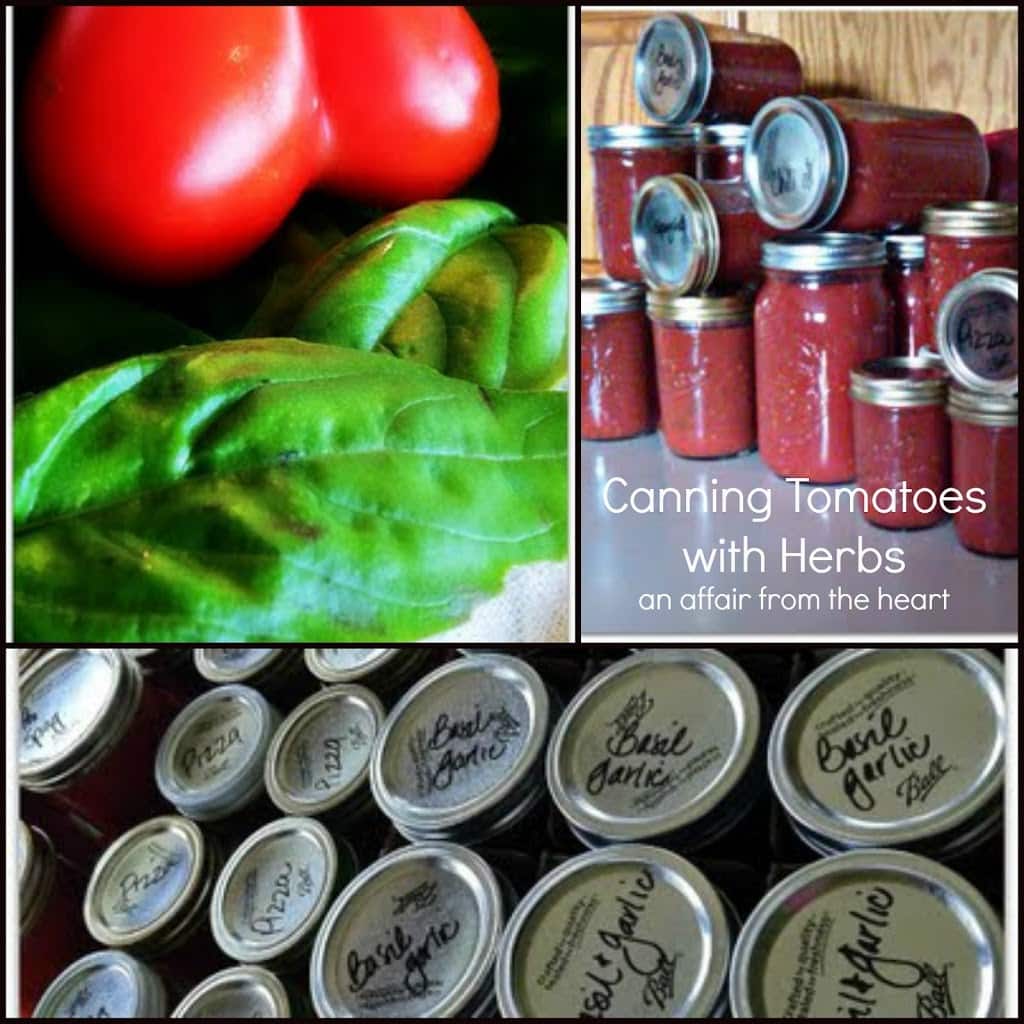 So many different flavors!! 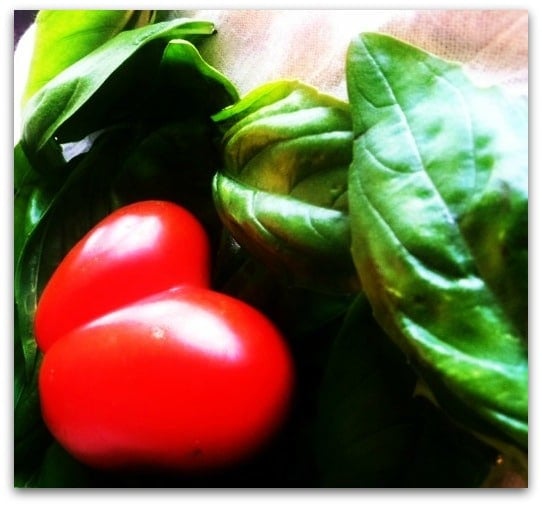 I heart home grown tomatoes
I will begin this blog by saying that I have a new appreciation for my grandmothers.  We ALWAYS had quarts of canned tomatoes in our basement.  My grandmas always supplied them.
Wow.
That’s a lot of work.
I have “put away” vegetables lots of times, corn, tomatoes, peppers, but I have always frozen them.﻿  This year, my good friend, Betsy, asked me to come and can some with her.  I had seen this post from a fellow blogger about basil garlic tomatoes, and shared it with her. She was all ready to join the fun!
Her and her THREE 5-gallon buckets of Roma tomatoes!!
We decided that while we were making one kind, we might as well experiment.  Her spice garden was doing phenomenally this year, so we went to town! 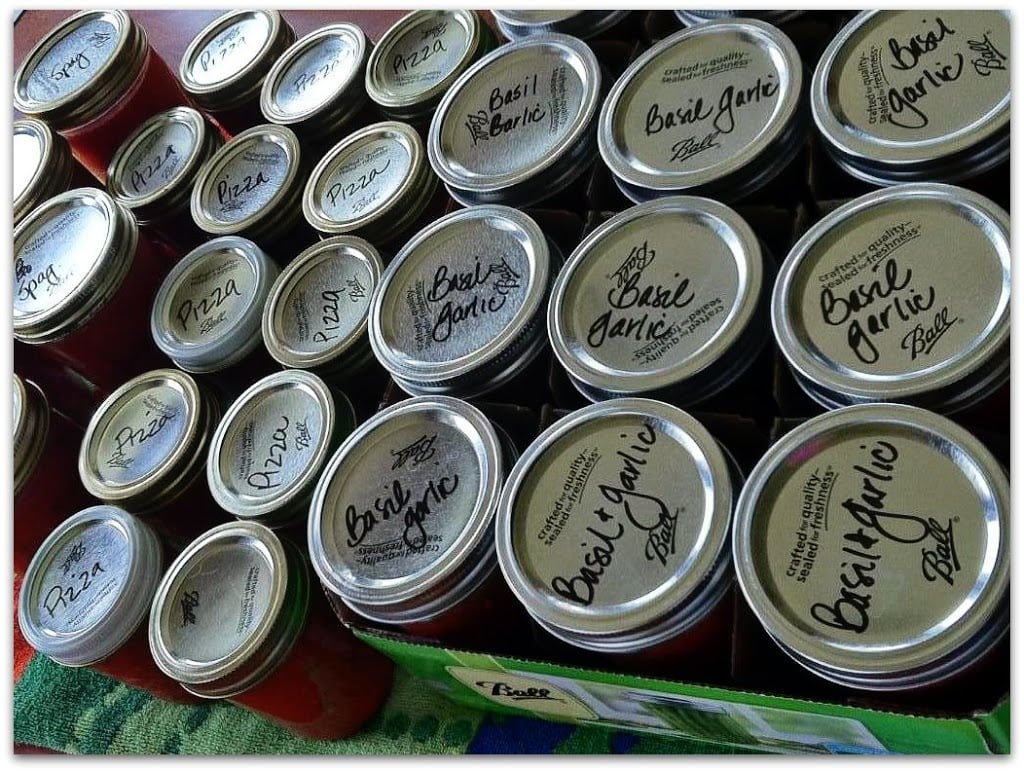 the first two sauces as they came out of the canner
We picked from her spice garden, fresh basil, thyme, oregano and rosemary. I wish I would have taken pictures of all of the herbs!!
They all smelled amazing!!
Now, I will begin by telling you that we didn’t measure anything, we made all of these sauces by taste. So, I will tell you how we did it and what is in each one, but you will just need to do it following your own taste buds.
First we washed all of the tomatoes, again we used almost all Roma ones. 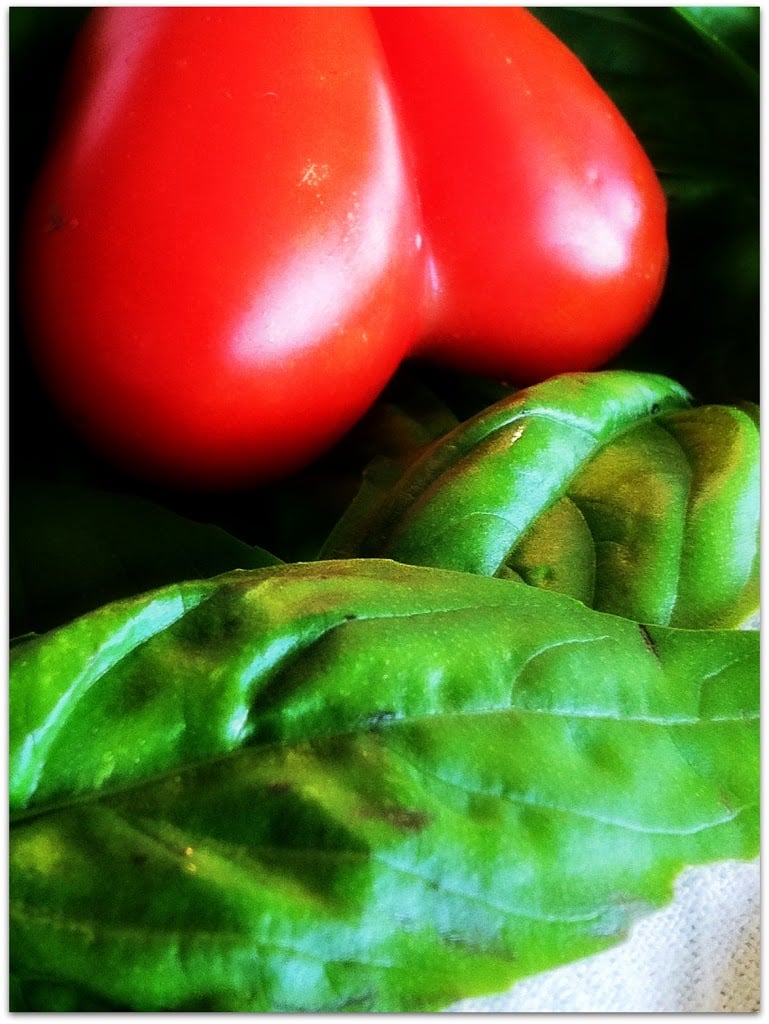 cute lil tomato butt, we can’t use you!
Then we quartered them and put them in a blender, liquefied them and poured them into a big soup pot. Then we turned the heat up and let them cook down.  I have to say when they get big pink fluffy foam on top you wonder what you have gotten yourself into!! Ha!
We added a little sea salt and pepper, and when the “pink foam” was gone and the sauce was thickened, we transferred them to canning jars and cooked them to seal them.  One more thing, before we put the sauce in the jars, make sure that you add 1 Tablespoon of lemon juice to each pint sized canning jar for citric acid. 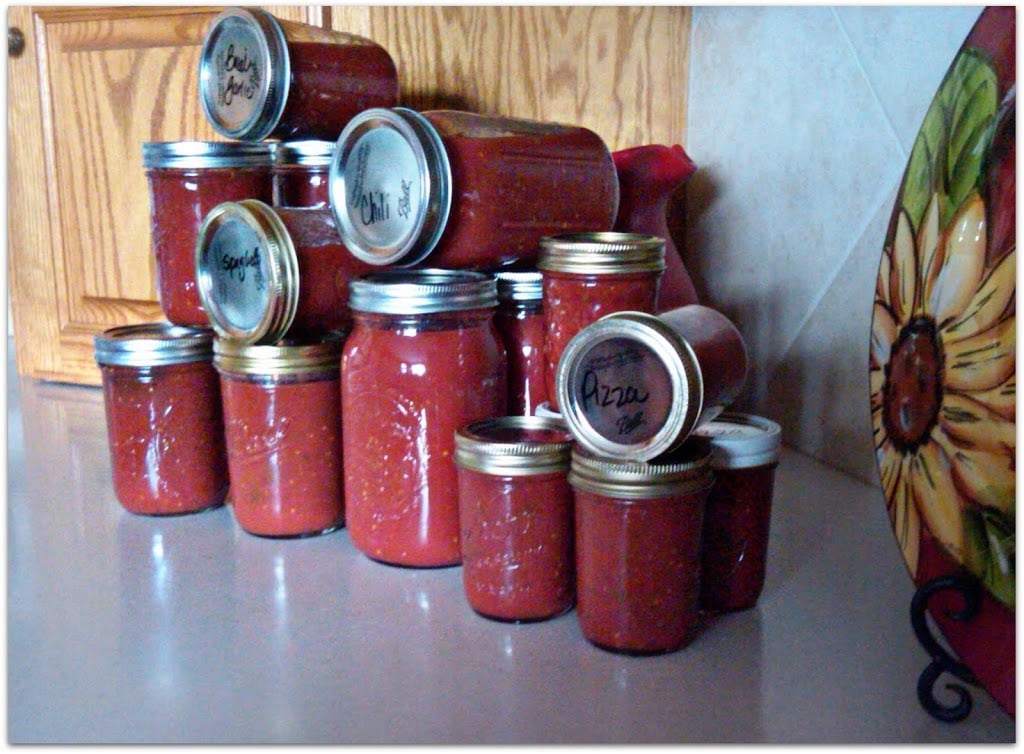 my half of the sauces we made
We made four different sauces: Basil & Garlic, Pizza, Spaghetti and Chili.
Here is the spices we added to each, while the tomatoes were cooking on the stove in the soup pot.
Basil and Garlic
For this one, we just did a base sauce with salt and pepper, and then when it was placed in jars we added fresh basil leaves (4-5 per pint jar) and 2 cloves of garlic.  They would be cooked during the sealing process for 40 minutes, you can remove them or blend them in when it comes time to cook with them.
Pizza
This one we did in smaller jelly jars.  This one had chopped garlic, oregano and basil added to the base sauce while it simmered. I think this one is my favorite, it smelled AMAZING!
Wish blogs had a scratch and sniff…
Spaghetti
We called this one spaghetti, but it would be a good base pasta sauce for about anything.  This one started again with the base sauce, we added chopped onion, garlic, thyme, rosemary and basil.
Once it simmered down,
(every time I say that I here this one teacher i had in grade school saying
“Class…. Simma down now!”﻿)
we used a hand blender and pureed all of the onions into the sauce.
Chili
For the chili sauce we used the base sauce and added a little more cracked seasoned pepper corn. Then some red pepper flakes. It had a really nice subtle spice to it, that way if you want to have a milder chili you haven’t already spiced it too much.
We figured that using minimal amounts of salt would be good, too. You can always add more, right?
Well, it took Betsy and I from 8:15 AM until 2:15 PM to can all of these, but I had SO MUCH FUN and learned SO MUCH! I thank her for teaching me one more thing… I am lucky to have her as a friend, she pretty much knows how to do EVERYTHING! 😉  Next week… peach ginger jelly!
Yay!!

Hey! I’m Michaela, welcome to my kitchen!  While you’re here with me, I hope that you will find all sorts of simple and yummy recipes to share with your family. I pride myself on sharing tried ... END_OF_DOCUMENT_TOKEN_TO_BE_REPLACED