I have found my new favorite drink for the summer!

The Moscow Mule is nothing new, in fact it’s been around since the 1940’s. (Via Wikipedia:) The cocktail was invented in 1941 by John G. Martin of G.F. Heublein Brothers, Inc., an East Coast spirits and food distributor, and “Jack” Morgan, President of Cock ‘n’ Bull Products (which produced ginger beer) and proprietor of the Cock ‘n’ Bull restaurant onSunset Boulevard in Los Angeles popular with celebrities.

Served in these great copper mugs, they are cold, refreshing and just plain delightful.

I know there are many ways to make a Moscow Mule, but I am going to share with you the way I was taught.  It doesn’t require making any simple syrups like most, and only requires 3 ingredients, unless you count the ice, then it’s four!

I love my copper mug, but don’t let the lack of one keep you from giving this classic cocktail a try, it’s tastes just as good in a short cocktail glass. 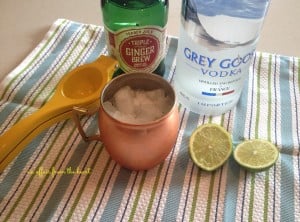 Crushed Ice, Ginger Beer, vodka and half a lime is all it takes! You can also add a touch of finely grated ginger as well. Either mix it in, or just garnish on top with the lime to add extra ginger zing to it.

Real old school authentic ginger beer does actually contain alcohol. However, most of the popular modern brands like Cock N Bull, Fever Tree contain so little alcohol they are considered non-alcoholic. So in reality, even though they are called “ginger beer” they are really closer to ginger soda, aka ginger ale.

The more snap the ginger beer has, the stronger the ginger heat, the better the Moscow Mule. Obviously, if you can’t find a ginger beer on the shelves, then ginger ale works too. But, in that case, you definitely want to grate in some fresh ginger in order to increase the actual ginger flavor.

With a Moscow Mule, follow these tips and you can’t beat it. A great cocktail for a hot day by the pool.

Pour in 2 ounces of vodka.

Add half of the can of Ginger Beer (6 ounces) to the glass.

Squeeze half of the lime into the glass and drop it into the cup.

Give it a quick stir and Serve!

Hey! I’m Michaela, welcome to my kitchen!  While you’re here with me, I hope that you will find all sorts of simple and yummy recipes to share with your family. I pride myself on sharing tried ... END_OF_DOCUMENT_TOKEN_TO_BE_REPLACED